Its important to get 3rd jab as soon as possible, Boris says 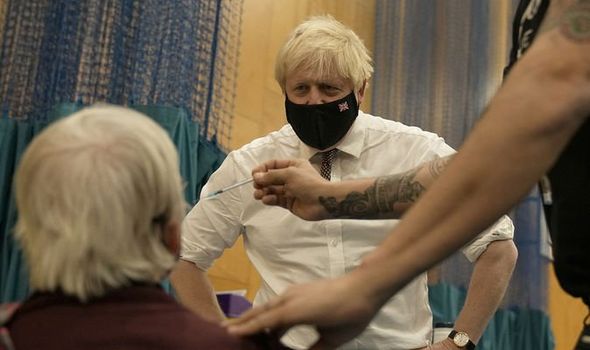 On a visit to a London vaccine clinic yesterday, the Prime Minister said “a lot of people” in Whitehall are engaged in working out how boosters might help avoid an autumn Covid wave.

He emphasised that it is “important” people over 50 prioritise getting a booster.

His statement came after a senior figure on the Joint Committee on Vaccination and Immunisation confirmed reducing the six-month prebooster gap is a possibility.

Anthony Harnden, deputy chairman of the JCVI, told BBC Radio 4’s Today programme: “It is something that could be considered but I think the data is showing six months is a sort of sweet spot.

“Whether it’s five months or whether it’s seven months isn’t so important, but I think what is important is that people get that booster dose.”

On the subject of offering boosters to people in their 40s, Prof Harnden said it was not yet time to make that decision, saying: “People who are eligible for the booster will have had their first immunisation in January and their second in April, so it’s a long time before we need to consider the 40-year-olds.”

When asked for his feelings on the possibility of speeding up booster doses, the Prime Minister commented: “That’s a very good question, and an important question, I think a lot of people are looking at that issue.And I heard with great interest what Anthony Harnden of the JCVI had to say this morning about that.”

Pressed on whether the Government may soon introduce a lockdown, Mr Johnson said: “I’ve got to tell you at the moment that we see absolutely nothing to indicate that that is on the cards at all.”

Mr Johnson’s Cabinet is under renewed pressure to speed up the booster rollout after a recent spike in cases, amid warnings the number of new infections is heading towards 100,000 a day.

Ministers insist any decision must be based on advice from scientific and medical experts.

Mr Johnson repeated his call for people to come forward for their booster jabs once invited by the NHS.

“I think that people should be coming forward with the same spirit of determination to get their boosters as we saw earlier on this year, it’s a very good thing to do,” he said.

“It gets you a huge amount of protection, and we always expected that we would see numbers rise right about now, that is happening, and you’ve also got to take into account the waning effectiveness of the first two jabs.

“So get your boosters now.” He added: “Our autumn and winter plan always predicted that cases would rise around about now and we’re certainly seeing that in the numbers… but they’re not outside the parameters of what was predicted or what we thought we’d see in the autumn and winter path.

“But it’s very important that people do follow the guidance.”