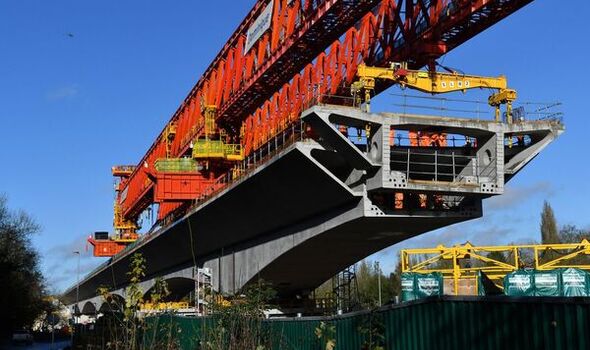 Transport experts warned the spiralling prices in the construction industry means the true cost of the high speed rail line could balloon above £100 billion.

Ministers will assess a business case by HS2 Ltd, the company in charge of the project, and recalculate its cost to factor in spiralling prices in the sector.

The current total price estimate of the project is between £72 billion and £98 billion, based on 2019 prices.

Andrew Gilligan, a former Downing Street transport adviser, warned this would rise “very significantly” when the figures are updated.

The official government review of the prices will take into account inflation in the infrastructure construction sector, which was 18.1 percent in September, according to the Office for National Statistics.

MPs who oppose the project have urged Rishi Sunak to scrap the second phase of HS2, which would link the West Midlands to Manchester.

Critics believe the costs cannot be justified when the tax burden has risen to the highest level in decades.

Chancellor Jeremy Hunt confirmed in his Autumn Statement last month that it would continue with the project as planned.

He said he would “not cut a penny from our capital budget” and would continue with major projects.

But a number of Tory MPs warned before the statement they would not support any tax rises unless the Government scraps HS2.

Michael Fabricant, Tory MP for Lichfield, said it was “a national disgrace” to proceed with HS2 when tax rises and spending cuts had been brought in by the Chancellor in his latest Budget.

He said: “I, and others, continue to press the Government to consider using these vast sums of money to support the NHS, education, and other services which our nation so needs instead of this failing project.”

Mr Hunt, who spoke with site engineers and apprentices during a visit to the line’s interchange station in the West Midlands, said: “We could have balanced the books with big cuts to capital projects, but better transport connections spread wealth and opportunity – so we are proud to back HS2.”

HS2 has been criticised for years over its spiralling budget, lengthy delays and the damage it has caused to the environment.

A Department for Transport spokesman said: “HS2 will bring transformational benefits and is currently supporting 29,000 jobs. We’re committed to delivering it as set out in the Integrated Rail Plan, and construction is under way and within budget.”