Frost mocks Chris Bryant for winning prize as old tweets emerge Bar must have been low!

Lord Frost, the former minister and Brexit negotiators, shared tweets sent by Mr Bryant mocking and chastising him. The Twitter messages appeared to single out the ex-minister and attack him for his views.

Sharing pictures of the tweets on social media, Lord Frost said: “The bar for civility in politics is obviously set a bit lower than I thought.”

In one message, Mr Bryant described Lord Frost as an “idiot” in response to remarks made on LBC.

The former minister had told the radio station’s presenter, and Daily Express columnist, Nick Ferarri that the Northern Ireland Protocol “must be re-negotiated” as it wasn’t working.

In another message, the Labour politician directly re-shared a tweet from Lord Frost in the aftermath of the Tiverton and Honiton by-election last week. 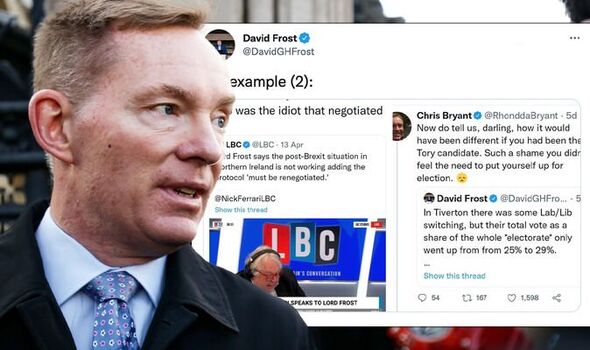 The Conservative peer had argued the party had lost the seat not because of the success of Labour and the Lib Dems but the failure of the Tories.

Criticising Lord Frost, Mr Bryant said in a patronising tone, Mr Bryant said: “Now do tell us, darling, how it would have been different if you had been the Tory candidate.

“Such a shame you didn’t feel the need to put yourself up for election.”

Lords are banned from running for election to the House of Commons unless they agree to lose their title.

Mr Bryant said he was surprised at winning the award last night after admitting he can be “quite fierce”.

However, he said he always tries “to be polite, civil and empathetic in every engagement”. 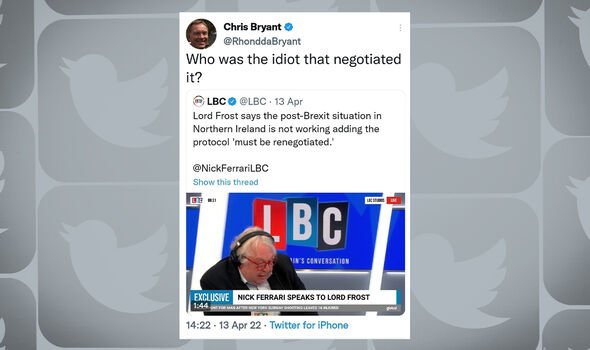 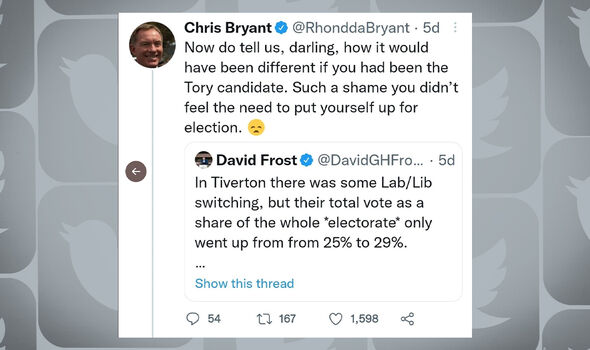 He told those at the awards: “I am delighted and rather surprised to receive this award, not least because I can be quite fierce in my questioning of ministers.

“But politics doesn’t have to be brutal.

“Our opponents are human and nobody has a monopoly on truth, so I try to be polite, civil and empathetic in every engagement.

“In fact, I suspect the public would be surprised how much MPs cooperate across the party divide. 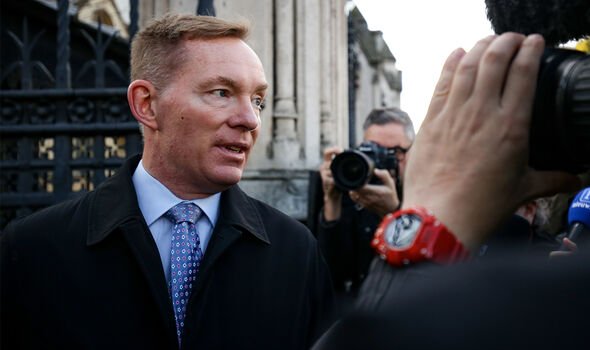 “We may growl at each other in public, but often our engagement with each in private is perfectly amiable.

“We should show that more often. Manners maketh humanity.”

The pair received £1,500 each for a charity of their choice as a prize fund.