EU plot: Bloc leaders hold talks away from Boris at G7 ahead of crucial Brexit talks 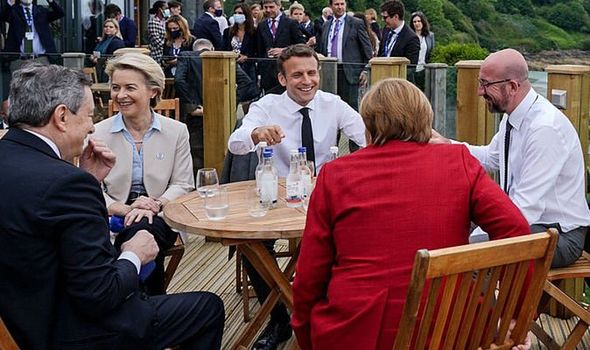 With the fallout over Brexit tipped to dominate discussions between the UK and EU nations in attendance, the five European leaders all gather for a catch up.

Mr Macron shared a picture of the gathering on social media.

In a sign the group will stick together in discussions taking place over the weekend, the accompanying caption read: “As always, the same union, the same determination to act, the same enthusiasm! The G7 can begin.”

Trilateral talks on the Northern Ireland Protocol are expected to take place over the weekend between Mr Johnson, Ms von der Leyen and Mr Michel.

The mechanism has led to a deterioration in relations between the UK and EU since the end of the transition period at the start of the year.

Warning the bloc would not budge on the Protocol ahead of the G7 summit, Mr Macron said: “I think it’s not serious to want to review in July what we finalised after years of debate and work in December.”

He added: “We have a protocol under which there is this Northern Ireland protocol and we have a trade deal.

“It has been painfully discussed for years, and discussed, let me remind you, on the initiative of the British who decided to leave.”