WASHINGTON — In choosing a slate of doctors to testify about coronavirus treatments before his committee on Tuesday, Senator Ron Johnson has assembled a cast of witnesses who question much of the public health consensus about the virus.

There is a prominent vaccine skeptic, an outspoken critic of masking and social distancing, and at least two doctors who have promoted the use of an anti-parasitic drug that government scientists have recommended against using to treat the coronavirus.

It is the latest example of how Mr. Johnson, a Wisconsin Republican who has used his powerful investigative panel to amplify groundless accusations pushed by President Trump, has now embraced the role of the Senate’s leading Covid contrarian.

Even as some of his Republican colleagues have sought to use their platforms to encourage Americans to take precautions against the spread of the virus and persuade the public that vaccines against it will be safe and vital, Mr. Johnson has suggested that the dangers of the coronavirus have been overblown and excessively regulated. And twice in the past three weeks, Mr. Johnson has used his gavel on the Homeland Security and Governmental Affairs Committee to elevate voices who public health experts say represent fringe beliefs.

It has set off something of a quiet mutiny on the panel, enraging Democrats who plan to essentially boycott the traditional cross-examination of witnesses and unsettling some Republicans who are planning to skip Tuesday’s session lest their presence be seen as lending credence to the proceeding.

The selections underscore the extent to which Mr. Johnson, a former plastics baron who has made little secret of his disdain for the Washington establishment, has eagerly echoed the most conspiracy-minded and anti-science impulses of Mr. Trump and waded headfirst into battles even the president’s usually reliable phalanx of congressional defenders have been unwilling to fight.

Mr. Johnson spent much of the year pursuing a corruption inquiry into President-elect Joseph R. Biden Jr. and his son, Hunter, that he conceded was driven by Mr. Biden’s political campaign, and that ultimately found no wrongdoing by the elder Mr. Biden. Since the election, he has questioned whether Mr. Biden won fairly, saying last week that Attorney General William P. Barr should produce proof to back up his statement that the Justice Department had found no evidence of the kind of widespread voter fraud Mr. Trump has baselessly insisted cost him the election.

Mr. Johnson is unfazed by the criticism he has attracted.

In an interview on Monday, he said that while he supported widespread vaccination and masking, he believed that many of his colleagues had been too deferential to a public health establishment that, because of its obsession with finding a vaccine and lack of experience treating coronavirus patients, had undermined, neglected and even “censored” other potential treatments that he believes could help.

“We have grossly overreacted to this,” Mr. Johnson said of the virus. “We have not been smart. We should have isolated the sick, protected the vulnerable and then the rest of us carry on with our lives as safely as possible.”

Mr. Johnson’s lead witness on Tuesday, Dr. Jane M. Orient, has cast doubts on coronavirus vaccines and has pushed for the use of hydroxychloroquine, an antimalarial drug pushed by Mr. Trump, as a treatment. She helps run a group that believes government vaccine mandates violate human rights.

Two others promote the use of ivermectin, a drug often used to fight lice and pinworms, to treat coronavirus patients, despite the National Institutes of Health’s recommendation against its use outside clinical trials.

Mr. Johnson said he felt that the public had a right to learn about early treatments they might not otherwise be aware of.

“There’s a blackout on good information in social media and media,” he said. “So people are being denied information to make intelligent choices themselves.”

Senator Gary Peters of Michigan, the top Democrat on the panel, fretted that the witnesses would “amplify theories that are at odds with the broader scientific community and, according to experts, could cause harm.”

“These fringe views run counter to what the Senate should be doing — working on a bipartisan basis to protect the American people and tackle this deadly pandemic,” Mr. Peters said. 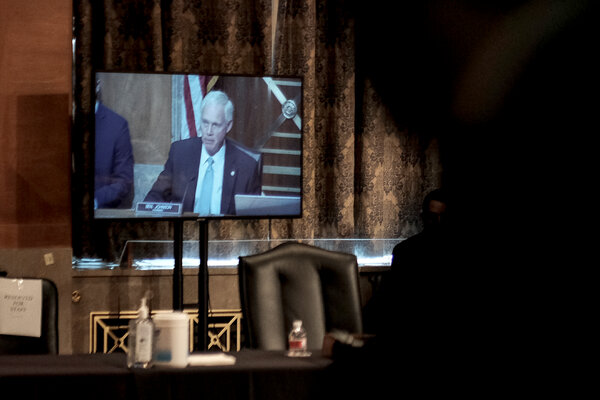 He pointedly declined to invite a witness to Tuesday’s hearing, and his aides said he did not plan to engage with the witnesses during the session. Instead, he is working with a group of a dozen prominent health experts to draft a letter to submit for the Congressional Record challenging their views.

Mr. Johnson’s inflammatory public statements and his decision to give a platform to an assortment of contrarian doctors promoting alternative treatments have also irked some fellow Republicans, who have privately groused that he is acting irresponsibly. But in the clubby Senate, few are willing to criticize a colleague openly or challenge a chairman on how he runs his committee.

Senator Mitt Romney of Utah, who had criticized the Hunter Biden inquiry as politicized, conspicuously skipped questioning witnesses at the earlier coronavirus hearing and does not plan to attend on Tuesday. Senator Rob Portman of Ohio, who is slated to take the top Republican slot on the panel in January after Mr. Johnson’s term as chairman ends, has gone out of his way to project trust for the scientific consensus on the coronavirus, publicly announcing last month that he had signed up for a vaccine trial in part to persuade Americans that it was safe.

Dr. Ashish Jha, the dean of the Brown University School of Public Health, who tangled with Mr. Johnson at a November hearing dedicated to hydroxychloroquine, called that event “a powerful reminder that not even Congress is immune to toxic conspiracy theories.”

At the hearing, Mr. Johnson wondered aloud why medical professionals like Dr. Jha had scorned the drug, which has repeatedly been shown to be ineffective at treating coronavirus patients, and were supporting another drug, remdesivir, which has been shown to work but is more expensive.

“He’s giving platforms to people who are way outside of the mainstream medical community,” Dr. Jha said in an interview.

Mr. Johnson said his own coronavirus infection in early October — “I had two positive tests. I guess they’re valid,” he said — did not require treatment.

Mr. Johnson’s interest in health issues is longstanding and consistent with his more recent statements. He was the lead sponsor, for example, of so-called right-to-try legislation that Congress overwhelmingly approved in 2018 to allow seriously ill patients to bypass the Food and Drug Administration and use unproven experimental treatments.

“He has always been a contrarian person,” said Mark Becker, the former county chairman of the Wisconsin Republican Party, who recently wrote an op-ed for The Bulwark, a website with a bent toward “Never Trump” conservatism, about a recent call with Mr. Johnson.

“But everything on the Republican side has turned to be a political argument, even a public health crisis,” Mr. Becker said. “And he still cares about not pissing off those Trumpers. He said that to me very clearly: ‘I’m not going to piss them off.’”

The calculation is most likely a shrewd one as the senator looks toward running for a third term in 2022 in a competitive state where he has twice been elected by narrow margins. Though he initially pledged to serve only two terms, Mr. Johnson has since hinted that he may feel compelled to run again, arguing that times have changed. Mr. Trump’s vocal support could be key.

“What’s wrong with you? I mean, what is wrong with you?” Mr. Nelson said in an interview. “Do you not see the existential threat that communities like your hometown are facing, have been facing?”