Johnson grilled by Kuenssberg on not ‘ditching’ relaxation

Boris Johnson admitted that the laws surrounding gatherings over the Christmas period would not be changing despite the surge in coronavirus cases. During a briefing on Wednesday with Chief Medical Officer Chris Whitty, the Prime Minister asked that Britons have a small Christmas gathering if possible and take personal responsibility. BBC’s political editor Laura Kuenssberg lashed out at Mr Johnson during the briefing and pleaded with him to change the rules to stop this.

Mr Johnson again reiterated the importance of personal responsibility and claimed it would be “inhuman” to stop people from gathering for the Christmas celebrations.

Ms Kuenssberg asked: “You have been telling the country today to exercise extreme caution.

“But you are still allowing a five day period to go ahead when people from all over the country would be able to get together.

“Wouldn’t it now be safer, clearer and perhaps braver to ditch the plans to relax the rules over Christmas?” 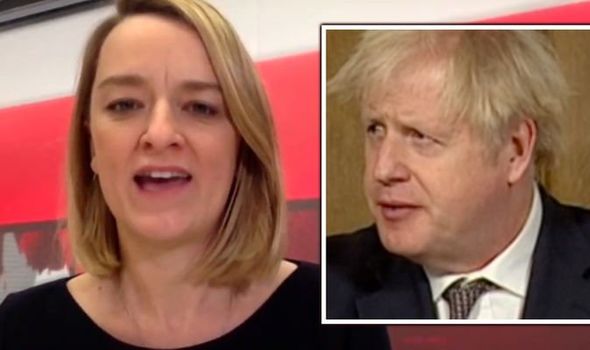 Mr Johnson replied: “I want to be clear, we don’t want to ban Christmas or to cancel it.

“But what we are saying is that that guidance the three households and the five days should be regarded as a maximum.

“Those are the outer limits and really people should think very hard about coming in under those limits and what they can do to minimise their own personal meetings with other people and to protect themselves and their family.

“There are all sorts of ways in which we set that out in the guidance.”