The midday deadline for a deal on tougher coronavirus restrictions in Greater Manchester has passed without news of a breakthrough.

Local leaders are pushing for the government to up their offer of financial support from £22 million to £75 million to help struggling workers and firms who would be hit by stricter measures.

Neither side has yet said if an agreement has been struck. 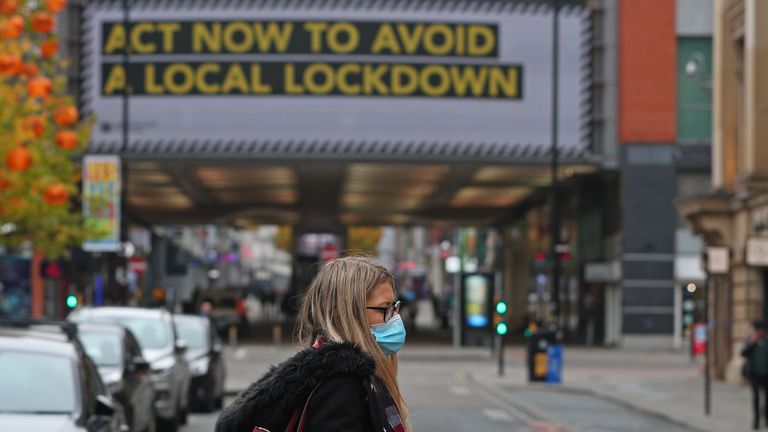 They had been racing to secure a compromise by 12pm on Tuesday – the deadline set last night by Communities Secretary Robert Jenrick.

Prime Minister Boris Johnson has made clear he is willing to impose the move to Tier 3 “in order to protect Manchester’s hospitals and save the lives of Manchester residents”.

That would take around three million people into the highest band of COVID-19 restrictions, as the UK battles a second spike of coronavirus cases and deaths.

Earlier, mayor of Greater Manchester Andy Burnham criticised a “late-night ultimatum” by Mr Jenrick that he called “a bit provocative”.

Responding to the £22m offered by the government, Mr Burnham accused ministers of “trying to penny pinch”.

But he said he would “accept” Tier 3 being imposed if Mr Johnson chooses to, because it is his “prerogative”.

Business minister Nadhim Zahawi said a “good package” of support was already on offer and there could be “more to come”.

And he cautioned swift action was necessary because by the first week of November at the current trajectory, there will be no intensive care unit beds in Greater Manchester.