Brexit LIVE: The three Tory Party candidates who will anger Von der Leyen and EU the most

Liz Truss, Kemi Badenoch and Suella Braverman have all been outspoken on the need to change the terms of the deal with the European Union. Kemi Badenoch is one candidate hoping to step into Boris’ shoes and according to her former employer she was encouraging them to publicly back Brexit. 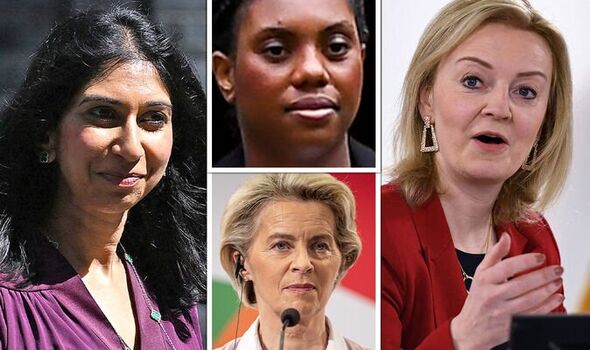 Fraser Nelson who is editor of The Spectator magazine, said: “She couldn’t understand why the greatest country in the world had so many in it that thought so little of it, so much so that they’d allow it to be swallowed up by European conglomerate.”

Another candidate likely to anger the EU and leader Ursula Von der Leyen is Liz Truss who came up with the idea of changing the Northern Ireland protocol.

The EU’s refusal to negotiate the protocol sparked calls for the UK government to come up with a solution for the treaty that Boris said “is turning into a political problem”.

Another supporter of changing the Northern Ireland protocol is Suella Braverman who is also in the running to be the next Tory leader.

Ms Braverman vowed to get Brexit done, adding: “I saw Brexit as the most important political decision of my life. I now realise that I cannot rely on others to take Conservatism forward.”

Rees-Mogg warns that those who betrayed Boris will now seek to neuter Brexit. Too true. One of the Spartans has warned me: ‘This is a battle for Brexit,’

Good morning from London. I’m Cally Brooks and I will be running today’s live blog.