Pfizer says it will seek clearance in September for its vaccine to be used in children aged 2 to 11. 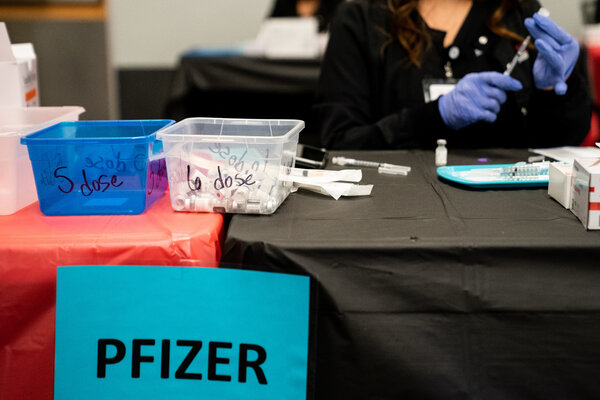 Pfizer expects to apply to the Food and Drug Administration in September for emergency authorization to administer its coronavirus vaccine to children between the ages of 2 and 11, the company told Wall Street analysts and reporters on Tuesday during its quarterly earnings call.

The company said it also plans to apply this month for full approval of the vaccine for use in people from ages 16 to 85. And it said it expected to have clinical trial data on the safety of its vaccine in pregnant women by early August.

The Pfizer-BioNTech vaccine is being given to adults under an emergency use authorization that the companies received in December. Obtaining full F.D.A. approval would, among other things, allow the companies to market the vaccine directly to consumers. The approval process is expected to take months.

“Full approval is a welcome indicator of the continued safety and efficacy of the Pfizer vaccine,” Saskia Popescu, an infectious disease epidemiologist at George Mason University, said in an email. It could also “build further confidence in the importance of vaccination,” she said.

Full approval would allow the vaccine to remain on the market as the pandemic fades. It may also make it easier for companies, government agencies, schools and other entities to require vaccination. The University of California and California State University school systems, for instance, have announced that once coronavirus vaccines receive full F.D.A. approval, they will require students, faculty and staff members to be vaccinated. The U.S. military, which has seen many troops decline coronavirus vaccines, has said that it would not make them mandatory as long as they have only emergency authorization.

The F.D.A. is expected to issue an emergency use authorization early next week allowing the vaccine to be used in children 12 to 15 years old.

Jen Psaki, the White House press secretary, said at a news conference on Tuesday that she did not want to get ahead of the F.D.A., but that the administration was preparing to “make that accessible to additional, younger populations.”

Dr. Popescu said the possibility of opening up use of the vaccine to children in the United States was both exciting and frustrating. “We have essential workers around the world unable to get vaccines, and countries that may not have access for a year or more, so this conversation needs to be broadened to include global access,” she said.

Pfizer’s chief executive, Dr. Albert Bourla, said the company approached the F.D.A. on Friday with new data that it hopes will persuade the agency to allow its vaccine to be kept at refrigerator temperatures, rather than frozen, for up to four weeks. Currently, the limit is five days. He said the company is working on an updated version of the vaccine that could potentially be kept in refrigerators for up to 10 weeks, and hopes to have supporting data for that in August.