The last straw, for Leslie Hawkins, was her mother’s 93rd-birthday gathering in 2018.

Her mother, Mary E. Harrison, had long contended with multiple health problems, including diabetes and the nerve pain it can cause; hypertension; anxiety; and some cognitive decline. She was prone to falling.

Still, she had been a sociable, churchgoing nonagenarian until Ms. Hawkins, who cared for her in their shared home in Takoma Park, Md., began seeing disturbing changes.

“She was out of it,” recalled Ms. Hawkins, 57. “She couldn’t hold a conversation or even finish a sentence.” On her mother’s birthday, she said, “A bunch of us went to Olive Garden, and Mommy sat there asleep, slumped over in her wheelchair. I decided, nope.”

Ms. Hawkins and one of her brothers took their mother to see a geriatrician at Johns Hopkins Hospital, where she could supply only three correct answers on the 30-question test commonly used to assess dementia. “She didn’t really participate,” said the geriatrician, Dr. Stephanie Nothelle.

Fortunately, Ms. Hawkins had brought a list of the 14 medications Ms. Harrison was taking, several of which alarmed her new doctor. “I started chipping away at them,” Dr. Nothelle said.

She recommended stopping oxybutynin, prescribed to treat an overactive bladder, because “it’s notorious for precipitating delirium and causing confusion in older adults,” she said. She also suggested eliminating the pain medication Tramadol, which has similar effects and contributes to unsteadiness and falls.

At their next visit in three months, Dr. Nothelle told the family, they would discuss stopping several more drugs, including gabapentin for neuropathy; a diabetes medication that lowered Ms. Harrison’s blood sugar to unnecessary levels; and a reflux drug that nobody could remember her needing.

The follow-up visit did not happen as scheduled. Ms. Harrison fell and broke her hip, requiring surgery and six weeks in rehab.

Still, her daughter had gotten the message: Her mother’s many drugs might be harming her. “I went online and looked everything up and I started questioning her doctors,” Ms. Hawkins said.

More broadly, polypharmacy refers to an increasing overload of drugs that may not benefit the patient or interact well with one another, and that may cause harm including falls, cognitive impairment, hospitalization and death. It has sparked interest in “deprescribing”: the practice in which doctors and patients regularly review medication regimens to prune away risky or unnecessary drugs.

For older patients, the most commonly prescribed inappropriate medicines include proton pump inhibitors like Nexium and Prilosec, benzodiazepines like Xanax and Ativan, and tricyclic antidepressants, according to an analysis of Medicare data published last year. Over-the-counter products and supplements can also prove problematic.

“We spend hundreds of millions every year to bring meds to market and figure out when to start using them, and next to nothing trying to figure out when to stop them,” said Dr. Caleb Alexander, an internist and epidemiologist at the Johns Hopkins University School of Medicine. Yet among older people, adverse drug reactions account for one in 11 hospital admissions. 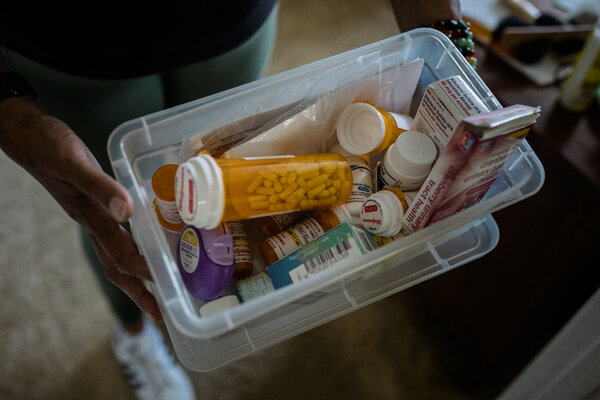 Hence the Drive to Deprescribe campaign, launched last month by the Society for Post-Acute and Long-Term Care Medicine, known as AMDA, which represents medical directors and administrators of long-term care facilities, where polypharmacy is particularly prevalent.

The initiative calls for a 25 percent reduction in medication use within a year, with AMDA monitoring the results. “An ambitious goal,” said Dr. Sabine von Preyss-Friedman, co-chair of the Drive to Deprescribe work group. “But if you do a little here and a little there, you don’t move the needle.”

To date, 2,000 facilities have enrolled, along with three major consulting pharmacies that serve them. That represents a fraction of the nation’s 15,000 nursing homes, with several large chains unrepresented, but “we are still recruiting,” Dr. von Preyss-Friedman said.

Another milestone in the polypharmacy battle: the U.S. Deprescribing Research Network, established in 2019 and funded by the National Institute on Aging. So far, it has awarded nine grants to test effective deprescribing strategies.

“Stopping a medication is not just the reverse of starting one,” said Dr. Michael Steinman, a geriatrician at the University of California, San Francisco, and co-director of the network. “It’s often much harder.”

The barriers reflect a fragmented health care system, in which a patient’s endocrinologist, for example, pays scant attention to what her cardiologist or neurologist has prescribed, while her primary care doctor hesitates to overrule any of them.

Deprescribing discussions also require time, a luxury during a brief office visit with a senior who may have many competing needs.

“There’s a general bias toward doing things in medicine,” said Dr. Ariel Green, a geriatrician and researcher at Johns Hopkins. “If we prescribe something, that’s seen as a positive action. If we stop something, or don’t start it, that’s not.”

So inertia can easily take over, with prescriptions being refilled year after year without anyone exploring why they were initially written, whether one drug duplicates another or whether the medications remain necessary or effective.

Most older adults say they are willing to reduce their medications, according to a 2018 study published in JAMA Internal Medicine — yet paradoxically, participants also said that all their medications were necessary.

Seniors may resist deprescribing, unwilling to see a drug routine they have been accustomed to for years as dangerous. “How do we talk about taking fewer medications without it looking like we’re withdrawing care, or like the person isn’t worthy of treatment?” Dr. Green said. Her own studies indicate that older patients respond well to discussions focusing on drugs’ possible side effects.

A dispiriting number of interventions aimed at deprescribing have had little impact, according to a review of 38 studies published last year. But one recent Canadian clinical trial showed significant results.

The study enlisted pharmacists, who handed or mailed patients a deprescribing brochure before refilling certain risky prescriptions. The pharmacists also contacted the prescribing doctors with forms explaining why the drugs might be harmful, providing safer alternatives and allowing doctors to change or eliminate prescriptions by simply checking a box.

“It was spectacular,” said Dr. Cara Tannenbaum, a geriatrician at the University of Montreal and senior author of the study. Now, she added, “How do we scale it up and get it out of research projects and into everyday practice?”

One way is for patients themselves to combat polypharmacy, by regularly asking their doctors to reassess their medications — sometimes bringing every pill bottle, including supplements, to an appointment for a “brown bag review.” A short list of potentially inappropriate drugs, published by the American Geriatrics Society, can help them spot problems.

That is essentially what Leslie Hawkins did for her mother, Dr. Nothelle said. “Every time she had a health care interaction, she asked, ‘Do we need this? Can we lower this? Can we stop this?’”

Ten months passed before Ms. Harrison could see her geriatrician again, and by then, “she was a completely different person,” Dr. Nothelle said. “She was awake, she answered my questions. It was night and day.”

Ms. Harrison’s score on the 30-question cognition test jumped from three to 25. She is starting physical therapy to improve her mobility. And she is taking four drugs — insulin, a blood pressure medication and two anti-depressants — instead of 14.

Ms. Harrison, now 95, still needs considerable assistance. But at her 94th-birthday celebration in a downtown Washington, D.C., restaurant, with 20 family members including great-grandchildren, “She was the life of the party,” her daughter said. “We had a ball.”