U.S. experts weigh the risks for younger women and cases of a rare blood-clotting disorder, and lift the pause in giving the one-shot vaccine. 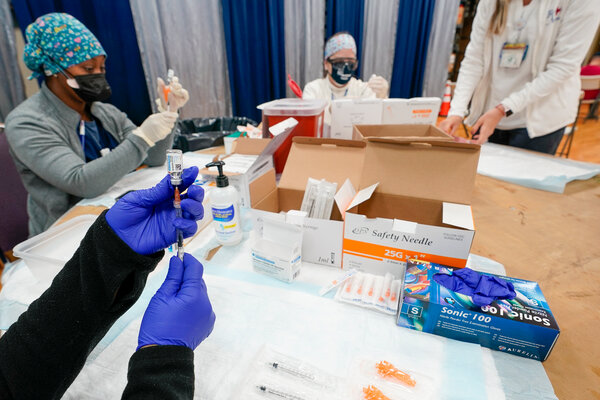 Use of the one-shot Johnson & Johnson Covid vaccine will resume within days, but with a warning added to its label about the risk for a rare blood-clotting disorder that has occurred among young women, the Food and Drug Administration said on Friday.

Concerns about the disorder had led to a pause in the use of the vaccine that began 10 days earlier.

The F.D.A. decided against limiting the vaccine’s use by age or gender, although some European countries have imposed such restrictions on a vaccine made by AstraZeneca because of a similar clotting disorder.

Federal health officials said information about the disorder would be provided at vaccination sites. Dr. Peter Marks, the F.D.A.’s top vaccine regulator, predicted that the vaccine could be deployed again by Saturday morning.

The Johnson & Johnson suspension came after officials learned that six women had developed a severe disorder that led to blood clots in their brains within about two weeks of receiving the vaccine. One died.

The pause was widely considered a blow to national and global vaccination efforts and removed an effective vaccine that many states and countries had counted on to deploy in hard-to-reach places. Unlike the vaccines made by Pfizer-BioNTech and Moderna, Johnson & Johnson’s vaccine requires only one shot and is easier to store and distribute because it does not require extremely cold temperatures.

At the advisory panel meeting about the blood-clotting issue on Friday, the C.D.C. reported that it had identified a total of 15 cases, including three deaths. But the risk is considered extremely small — nearly eight million Americans have received the Johnson & Johnson vaccine — and the panel ultimately decided that the vaccine’s benefits far outweighed its risks. It also concluded that failing to use it would lead to more deaths than the clotting disorder might cause.

The panel voted 10 to 4 to resume using the vaccine with the warning label. Some who voted “no” wanted a more prominent warning about the risk to younger women and the availability of other Covid vaccines that do not appear to pose the same risk.

Lifting the pause will allow many states to restart giving the one-dose shot to college students and hard-to-reach populations like rural Americans, migrants and the homebound elderly. Their access had been hampered by the suspension, which left roughly 10 million doses sitting on shelves.

In Wisconsin, where one-third of the population is fully vaccinated, officials said they intended to begin using their Johnson & Johnson doses as soon as possible.