The founder of Deliveroo has urged Boris Johnson to relieve the pressure on Britain’s supermarkets by launching an information campaign to promote the safety of restaurant food as thousands of outlets face insolvency.

Sky News has been passed a letter from Will Shu, who runs the food delivery app, to the prime minister in which he warns that a vast economic support package unveiled last week will not be sufficient to keep restaurants offering takeaway and delivery services as the coronavirus crisis unfolds.

Wagamama, the Japanese noodle chain owned by The Restaurant Group, is ending takeaway services from its 155 UK restaurants from Tuesday, a decision that means temporarily suspending its partnership with Deliveroo.

The letter from Mr Shu, sent on Monday, argues that there is “significant confusion among the public about the transmission of the virus”, and called for ministers to highlight evidence from the NHS and other health bodies that it cannot be passed on through food.

“This concern is impacting on restaurant orders and putting further pressure on supermarkets as they are viewed as the only safe place to get food, despite the risks of contracting the virus being higher in a crowded supermarket than via takeaway food,” Mr Shu wrote.

He called for “urgent support… to prevent both small independent restaurants and large chains from closing in the coming hours”.

The Deliveroo chief asked the government “to mandate that all restaurant delivery services must be contactless – a step we and our primary competitors have already taken”, and to “produce official government information material, for use on social media and by restaurants for display in their windows, that makes clear that food delivery and takeaway, safely managed, is safe”.

Thousands of pubs and restaurants were closed at the weekend following an instruction from Mr Johnson that they would be required to shut in order to curtail the spread of COVID-19.

Deliveroo, which is awaiting a ruling from competition regulators about a proposed investment from Amazon, is facing a potentially turbulent period, even as demand is expected to increase in many of the markets in which it operates.

An unprecedented pledge from Rishi Sunak, the chancellor, that the state would pay 80% of workers’ wages for three months if they were not made redundant was broadly welcomed by business groups.

However, its implementation will come too late for many small employers, which are unable to meet other costs as they fall due in the coming days. 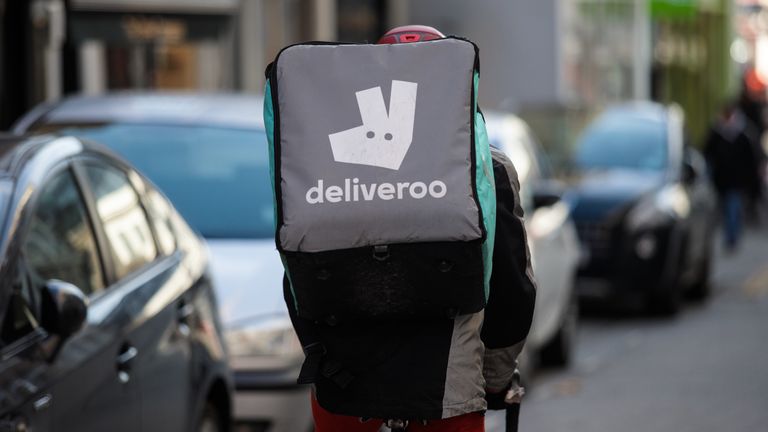 Mr Shu wrote that the Coronavirus Job Retention Scheme had “created an incentive for restaurants to close, rather than retain key staff to operate takeaway services”.

“This means that, without subsidy to support wages, the cost of retaining the necessary staff to provide takeaway food is, for most restaurants, likely to be greater than the revenues they can generate.

“Our analysis indicates that even if takeaway sales increase by 33-50% of their usual trade, restaurants will be 17-30% short of breaking even.

“This figure comes before rent costs which will compound the picture further for restaurants.”

The Deliveroo chief urged the government to provide a guarantee to restaurants remaining open for takeaway purposes that they would “at the very least not be worse off financially than if they closed and furloughed all staff”.

“Specifically, ​the Government should commit to paying 80% of the wages for critical restaurant staff who remain in work providing takeaway food, where the restaurant commits to paying at least 20% of wages​.

“This will ensure that the employees retain at least 100% of their usual earnings if they continue to work and continue to take part in ensuring that people at home have access to hot food – a vital public service during this crisis​.”

He asked ministers to require commercial landlords to provide a 90-day eviction holiday​, “allowing restaurants to remain in their premises to continue operating in the event they are unable to make upcoming rental payments”.

After his letter was sent, the government announced that it would introduce a three-month ban on evictions for commercial tenants who miss rent payments.