That New York Vibe and a Life in San Diego

By now, 2020 wedding guests have read the boilerplate. “In light of Covid-19, we want to let you know your health and safety are our top priority,” banners at the top of wedding websites say. This is often followed by this year’s version of the big reveal: whether the wedding is on or off.

Ana Bowens and Benjamin Schenk didn’t bother with any of that when planning their Nov. 7 wedding in Brooklyn. Instead, they challenged the 40 remaining friends and family members on their pared-down guest list to come up with the most intensive personal protection equipment and said that their reception would skip dancing — “It’s so 2019” — in favor of a talent show in a more socially distant theater. A mask protocol left little room for rule breakers to misinterpret: “The only time you’ll remove masks is when you’re eating and drinking,” guests were told in a prewedding email blast.

Those who know Ms. Bowens and Mr. Schenk could not have been surprised by their take-charge approach to avoiding the spread of the virus. Mr. Schenk especially has earned a reputation for determination. His immersive courtship of Ms. Bowens, a woman who he at first thought seemed out of his league, is an example, though his fortitude would fail him a few times.

Mr. Schenk and Ms. Bowens first saw each other across a table of lobster rolls at the Hanover Inn near Dartmouth College in September 2008. Both were incoming freshmen who had been invited to a welcome-to-college lunch organized by their mutual adviser. The conversation wasn’t exactly scintillating. “It was incredibly dull and forced, but my default is to be gregarious, so I tried to get people talking,” Mr. Schenk said. His single-handed efforts to liven things up did not go unnoticed by Ms. Bowens. “I distinctly remember him being incredibly talkative and loud,” she said. 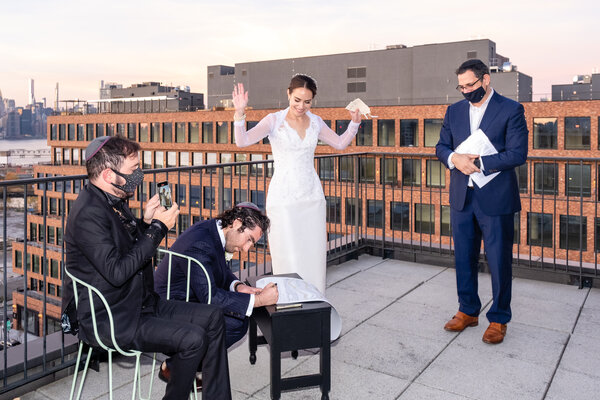 Her impression of him softened after lunch when he offered to let her go before him for individual meetings with the adviser. “I thought, ‘Well, that’s nice,’” she said. “But I don’t know if I’ll ever interact with this person again.” Mr. Schenk had doubts about that himself, given her East Coast élan.

Ms. Bowens, 30, is a New Yorker. At age 4, she moved to Manhattan from Southern California with her mother, Judith Bowens, younger brother, Max Bowens, and maternal grandmother, Dena Diamant, after her parents divorced; her father, John William Bowens, lives in Arizona.

“My mom always wanted to live and raise a family in New York,” she said. She made it happen through a career in fashion, first as vice president of store operations for Barney’s, and currently as manager of the DTech Lab at the Fashion Institute of Technology. Ms. Bowens’s city background, disclosed during the lobster roll lunch when the table took turns introducing themselves, instantly branded her as inaccessible to Mr. Schenk.

“You have to understand my frame of reference for New Yorkers,” he said. “I had never ventured beyond Times Square. When she said she was from New York, I saw it through a ‘Gossip Girl’ lens. I’m like, OK, we’ve got a Blair here. There’s no way a person like me is going to connect with a person like that.”

Mr. Schenk, also 30, is a native of San Diego. He didn’t expect to get into an Ivy League college. “Everything I did in high school was tethered to the goal of going to U.C.L.A.,” he said.

His father, Frederick Schenk, a partner in the law firm CaseyGerry, and his aunt, Lynn Schenk, a 1970s feminist who served in the U.S. House of Representatives, are devoted U.C.L.A. alumni. His mother, Shari Friedman Schenk, is a retired director of marketing at the San Diego law firm CaseyGerry. He grew up with two younger sisters, Michaela and Sydney.

“I was indoctrinated to U.C.L.A. in the womb,” he said. “All I wanted when I was growing up was to be a counselor at their alumni camp.” His application to Dartmouth was on a whim. Before he found his footing there, he suspected — not incorrectly, Ms. Bowens said — that he came across as an overeager suburbanite.

The sophistication he sensed he was lacking didn’t stop him from making friends, though, and by winter even Ms. Bowens started seeming relatable. “I would see her at hockey games,” he said. “She would sit in the front row wearing one of her distinctive scarves and I would sit in the 30th row watching her get really into it, yelling and banging on the glass. When I saw her wearing her emotions on her sleeve that way, whatever preconceived notions I had of this person being aloof were shattered.”

At the beginning of their sophomore year, he met her friend Jen Buchholz, who was also learning CPR in preparation for a five-day Dartmouth wilderness trip. “I asked Jen who her friends are as a way of getting to know her,” he said. “When she said Ana Bowens, I let out this very guttural, ‘Oh, I dig her vibe.’” That night, Ms. Bowens, emboldened by a Keystone Light at a fraternity party, would do something that would stunt Mr. Schenk’s college dating experience.

“She put her hand on my chest, flicked her hair, and said, ‘So, I hear you dig my vibe,’” he said. Mr. Schenk was knocked sideways. “The moment she did that, I decided I wanted to learn everything I could about her as quickly as possible.” The start of a fierce campaign to become her boyfriend had begun.

At first, Ms. Bowens indulged it. When she wasn’t meeting him to study or hang out with mutual friends, she was answering his long, inquisitive emails. “I learned how ambitious and intelligent she was and that her mother and uncle are U.C.L.A. alumni,” he said. “When she told me she was Jewish, which is important to me, I was like, ‘OK, let’s wrap this up.’” His bid to cut the getting-to-know-you phase and move onto something more serious was premature.

Only three weeks into sophomore year, over a hangout on the futon in his dorm room, he asked her to a Portugal.the Man concert under the condition that she attend as his girlfriend. Ms. Bowens, taken aback, said no and left his dorm immediately. “I was freaked out,” she said. “It was way too much pressure.”

Over the phone, she told her mother what had happened. Judith Bowens was less alarmed by the boldness of her daughter’s suitor, then quick to recognize his plan. “I told her Benjamin was playing the long game,” Ms. Bowens said. “He wanted this to become something that would last.”

[Sign up for Love Letter and always get the latest in Modern Love, weddings, and relationships in the news by email.]

She may as well have read his mind. “In the dorm room, I wasn’t thinking, Ana just trampled on my heart,” he said. “I was thinking, What’s my next move?”

It would take a while before he could execute it. In the spring of 2010, Mr. Schenk emailed Ms. Bowens an Arcade Fire song. Though she had given him the cold shoulder for months, her reluctance to resume the relationship started fading. She was on alert again when he showed up in the car of a friend who drove her from New York to Dartmouth for the start of a summer term.

“Benjamin weaseled his way into driving with this friend,” she said. But within weeks they were a couple.

Outside Dartmouth’s Baker-Berry Library in Summer 2010, Ms. Bowens told him they should just be friends. “It was too much too fast,” she said. Mr. Schenk demanded a handshake and stormed away. When she wrote him two days later to say she had made a mistake and regretted the breakup, relief flooded over him. “I responded immediately,” he said. They wouldn’t break up again until Spring 2012, just before graduation.

Their 2012 breakup had been a mutual decision. “Both of us felt like we wanted to do some exploration,” Ms. Bowens said. “It killed me,” Mr. Schenk said. Once again, Ms. Bowens’s ties to New York threw him.

“I always knew I would go back to San Diego,” he said. Doing so, he felt, was a way of honoring his grandfather, Sidney Schenk, a Holocaust survivor. “My family narrative is one of displacement,” he said.

In October 2015, he quit his job and bought a one-way ticket to California from New York. When Ms. Bowens said she found out, “I felt really thrown and disoriented.” They didn’t talk for nearly a year, until the 2016 presidential election, when Ms. Bowens held a gathering at her apartment for what she expected to be Hillary Clinton’s victory. “It turned into a really distressing evening,” she said. “I had this moment of internal crisis, and at that moment I realized Benjamin was the only person I wanted to talk to.”

The following spring, she flew to San Diego for a visit. “We put it all out there,” she said. “We decided right then we wanted to build a life together.”

Two years later, Mr. Schenk took a diamond ring that had belonged to his grandmother with him on a trip to the East Coast. On March 2, 2019, he proposed by the Dartmouth College library bench where she had broken up with him years before. “I said, ‘Ana Bowens, I dig your vibe. Marry me and I promise you won’t regret it.’”

They were preparing for a Nov. 7, 2020, wedding for 140 guests at the Wythe Hotel in Brooklyn when the coronavirus made its unwelcome debut. “We had watched some of our friends have their wedding dates come and go and turn into a sad day,” Ms. Bowens said. They made no space for sadness at their Covid-conscious ceremony and reception for 40 at the Wythe.

Ms. Bowens, in a lacy dress by the Israeli designer Dany Mizrachi customized by a former F.I.T. student of Judith Bowens, walked down an open-air aisle with her mother. Judith Bowens also had a hand in Mr. Schenk’s wedding clothes, designing his navy pinstripe suit with him before it was tailored at Martin Greenfield Clothiers in Brooklyn.

Rabbi David Ingber, who met the couple under a white floral huppah, urged them to seek and honor the infinite mystery of each other. In handwritten vows, Ms. Bowens promised to never regard their love as practical and to remain curious about Mr. Schenk. Mr. Schenk started by noting that he had been magnetized to her for 11 years. “I vow to love you the way you deserve — passionately and persistently — until I am no more,” he said.

Seconds later, with the Jewish tradition of stomping on a glass, they were married.

Where The Wythe Hotel, Brooklyn

Let the Games Begin Highlights during the theater-in-the-round reception included a choreographed tap dance by the groom’s sisters and two performances parodying “Body.by.BenAna” a Zoom fitness class the couple started while social distancing. In one, two friends from Dartmouth dressed up in workout clothes and led a two-minute workout skit for the crowd.

And the Winner Jake Hytken, a friend of the groom, won the most intensive personal protection contest with a bedazzled mask, medical-grade face shield and helmet. He was awarded a bottle of champagne.