Squishmallows Are Taking Over

Over the last few months, bulbous and brightly colored plush toys have sparked a Beanie Babies-style craze among children, teenagers and adults alike.

Squishmallows, a line of soft, huggable toys created in 2017, have exploded in popularity during the pandemic, thanks to social media and in particular TikTok (or “SquishTok,” as fans call it). Collectors say the stuffed animals have given them comfort in a painful year, and that hunting for them has fostered a much-needed sense of community during an extended period of isolation.

“Even though the craze was coming before the pandemic, it certainly hit a fever pitch in the past year, and this craving for comfort is a big part of it,” said Kelly Deen, senior vice president of marketing at Jazwares, the parent company of Kellytoy, which created Squishmallows.

Jazwares said in early March that it has sold more than 73 million toys. (In February 2020, The Toy Book, a trade publication, reported that the company had sold 50 million Squishmallows.) According to the company, sales of Squishmallows have tripled in the past six months.

Avid collectors own dozens if not hundreds of them. Melissa Whittaker, a 35-year-old cashier in New Hampshire, has more than 70 Squishmallows, each with a tag stating its name and unique traits. “I love their cute little faces,” she said. “They’re very nice to hug, and you can double them up as pillows.”

There are more than 800 Squishmallow characters, and hunting for rare ones has become a popular pastime. Squishmallow hunters post videos from their quests and memes about the frenzy on TikTok (where videos with the hashtag #squishmallows have accrued hundreds of millions of views), Instagram and Reddit. They also trade tips about where to find highly coveted characters.

Ilana Wiles, 46, a mother and Instagram influencer in New York City, said that she and her husband often take their 11-year-old daughter, Mazzy, on Squishmallow scavenger hunts around the city and on Long Island.

“It’s a fun activity, and they’re not that expensive if you’re buying them at a retail store,” Ms. Wiles said. “It’s a very big reward for not a lot of money.” Most of the toys are priced between $10 and $40, depending on their size.

Some that have become hard to find are fetching big prices at resale, though. According to Insider, Squishmallows are being resold for hundreds of dollars on sites like Mercari.

“The success of Squishmallows comes from the exclusivity, which helps drive collectibility, said Jonathan Kelly, co-president of Kellytoy. He said that the company is increasing production to keep up with demand.

“It’s created a lot of issues finding them in stores,” said Rebecca Brown, 21, a college student in Huntsville, Ala., who has 325 Squishmallows. “There’s a lot of scalpers now that go out and buy an entire store’s stock.”

Ms. Brown said Squishmallows have become particularly popular among students during the pandemic. Some position their Squishmallows in frame during their Zoom classes as a conversation starter or to show off their collections. Ms. Brown’s school, the University of Alabama in Huntsville, has its own local Squishmallow Instagram page, where fans can meet online and in-person and connect with each other. 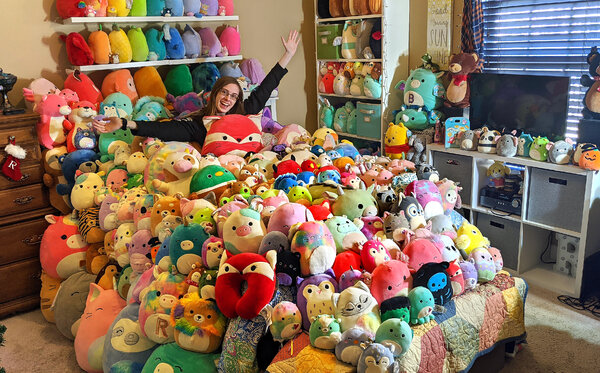 Gabrielle Marquez, 18, has about 70 Squishmallows. She keeps the larger ones on her bed and the smaller ones on a bookshelf or tucked away in a toy hammock or bedroom chair. She said that the stuffed animals are especially popular with young people dealing with anxiety or depression. “If you’re feeling down it helps to have something to hug or go out and make yourself happy by buying a new one,” she said.

Ms. Marquez has enjoyed “being able to find a community of other people who share the same common interest and talk with them about Squishmallows during lockdown when there’s not that much else we can do. I use this hobby to connect with friends all over, I have friends in other states and Canada now.” Last Wednesday, her high school declared the day “Squishmallow Wednesday” during a virtual assembly.

“When I’m doing school I can look over at my bed and see a fun unicorn or dragon or octopus looking over at me,” said Isa Armstrong, a high school sophomore in Westchester, N.Y. “It just brings me happiness and that warm and fuzzy feeling.”

She and other fans said they liked the inclusivity reflected in the bios of the plush dolls. “They just released a couple Squishmallows that are gender-neutral and use they/them pronouns,” Ms. Armstrong, 16, said. “I feel like it’s normalizing it for children, and I love that.”

Ms. Wiles said she hopes to take her daughter out Squishmallow hunting again soon. “There’s something so innocent about it that I fully support it,” she said. “We’ve just spent an entire year where kids are just at home on their iPads, so just that there’s something that’s captivating them that’s so simple and pure, it’s kind of nice.”