Kathy Hilton — dressed in a black Valentino gown, gold belt, and studded stilettos for a photo shoot — was begging for some attention.

“Moty!” she cried out from the grand helical staircase in her Bel Air home’s foyer. “Come up here!” Moty, her eight-year-old Pomeranian-poodle mix, gazed at her with trepidation and wagged his tail. Ms. Hilton sighed and shrugged.

No bother. The 62-year-old is getting plenty of notice these days from her turn as unexpected darling on this season of “The Real Housewives of Beverly Hills,” the Bravo series that chronicles the catfights and camaraderie of groups of wealthy women. Set amid a season of heavy legal dramas and lighter histrionic fare, Ms. Hilton’s oddball asides and eccentric behavior has sent the internet into paroxysms of adulation.

“I was speaking with some of the crew, and I said, ‘I’m curious. How am I coming off?’” Ms. Hilton said earlier that day, tucked onto a creamy couch in a well-appointed den as a candle the size of a manhole cover filled the room with a powdery floral scent. “And the words they used … they said, ‘You’re quirky and refreshing.’” Her sunny face went dumbstruck. “Quirky? Me? I’ve been asking my friends lately, ‘Do you think I’m quirky?’”

“Housewives” fans certainly do. “Thank the Gay Gods for Kathy Hilton,” trumpeted a headline from Buzzfeed News. According to Slate, her “blissful unawareness lets the series finally embrace camp,” which would either depress or delight Susan Sontag were she alive. “After shooting,” tweeted Alex Abad-Santos, a culture editor at Vox who has written about this season, “Kathy Hilton checked into the hospital with severe back pain from carrying this season of #RHOBH.”

Andy Cohen, an executive producer of the “Housewives” universe and its de facto king, thought she’d be a natural fit since her two half sisters, Kim and Kyle Richards, have been longtime centerpieces of the show. Still, even he was surprised by her onscreen charisma. “One thing you can never predict or manufacture is humor,” he said. “That’s something that just is. And I had no idea she was this quirky and funny.”

“She has this effervescence mixed with daffiness mixed with self-deprecation and an easy, breezy charm,” said the actress Casey Wilson who co-hosts a podcast, which treats “Housewives” minutiae like the Panama Papers. Already she’s spent many episodes analyzing, and lionizing, the show’s newest cast member. “She’s not invested in anything, which I appreciate,” Ms. Wilson said. “I have such a love for her.” 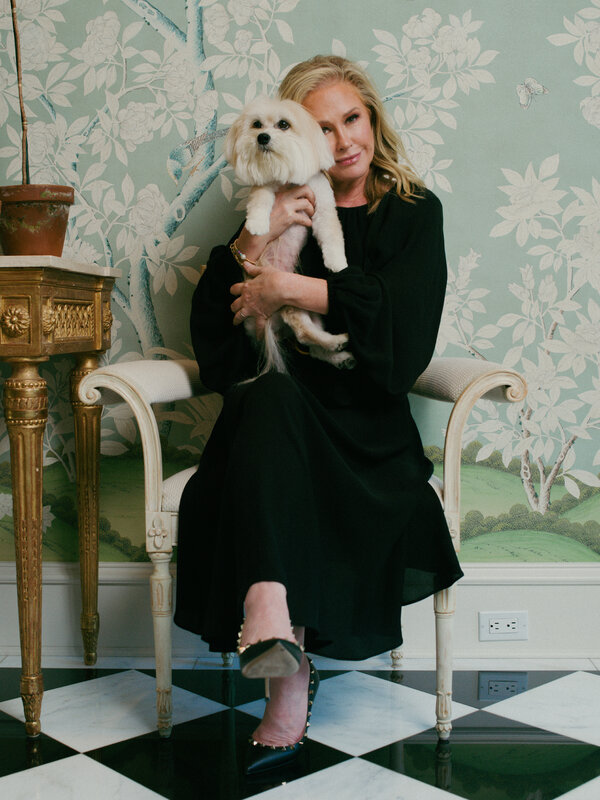 ‘Who is Hunky Dory?’

A list of things Kathy Hilton has done that have captivated her newfound fans:

She mistook a Black co-star, Garcelle Beauvais, for her half sister, Kyle Richards, who is white. On a girl’s trip to Lake Tahoe, she brought along a boxed fan because the noise it makes helps her sleep — however she seemingly didn’t know how to plug it in. On that same trip, she sneaked into Kyle’s bed in the middle of the night and then proceeded to eat from a crinkly bag of chips, crack open a Red Bull, and leaf noisily through newspapers at 1 a.m. During a round of the game “Two Truths and a Lie,” Ms. Hilton simply told three truths. She mistakenly put ear drops into her eyes. She crafts glittering Christmas wreaths which inexplicably feature small plastic baby doll figurines.

At a dinner party, when a castmate who was in the throes of a petty squabble said she would not pretend that things were “hunky dory,” Ms. Hilton looked around the table in confusion and asked “Who is hunky dory?” During an Instagram Live to promote the show, she had to be reminded which network it aired on (Bravo, Wednesday nights at 8 p.m.). When it was revealed that a cast mate, Erika Girardi, with whom she had socialized with on multiple occasions, was being implicated in a legal battle, Ms. Hilton immediately distanced herself from the situation, expertly deploying the choice phrase, “I don’t know her.”

On Bravo, the most iconic personalities are usually a deft combination of combativeness, pride, and ostentation. Yet Ms. Hilton has thrived despite lacking these essential traits, ones many would assume she possessed in spades.

She’s often a peacemaker, or busy pulling impish pranks while her co-stars trade barbs or watch their marriages dissolve into legal fiascos. She’s airheaded but earnest, caring yet kooky. While the other women arrive at casual gatherings in four-figure designer outfits engulfed in logos, Ms. Hilton prefers low-key T-shirts emblazoned with slogans of female empowerment.

Ms. Hilton recalls her “Housewives” initiation by fire, an invitation to a barbecue hosted by Dorit Kemsley, a castmate.

“Now I put on what I love to wear in California — a pretty, long, silky-cotton dress with espadrilles, which were brand-new and very cute,” she said. “Well, each one of them walks in wearing Pucci, Gucci, Fiorucci … it was like a mix between Fashion Week and an Oscars party! It was gorgeous. Now, I didn’t feel insecure — I thought I looked nice — but when the showrunner interviewed me about what I was wearing compared to them, I said, I thought I looked fine!”

Watching Ms. Hilton move through the world serves as a reminder that the truly affluent don’t operate by the same rules as the rest of us. She often seems unaware of or unconcerned by certain societal norms, or confused by life’s more menial drudgery. She keeps rich-person hours, going to bed as late as she pleases and happily sleeping in, even if, on “Housewives,” that means missing out on a planned group activity (and, crucially, more screen time).

Her co-stars like her because, “they know I’m not coming for their jobs,” she said. (In fact, Ms. Hilton is technically not an official housewife at all but, in Bravo parlance, a “friend of,” meaning her role is a supporting one.)

“I think people fell in love with her because she’s one hundred percent authentic,” her daughter Nicky Hilton Rothschild, 37, wrote in an email from Capri. “The most endearing part is that she doesn’t even know she’s being funny. It comes so naturally.”

Nicky said she was wary of her mother joining “Housewives,” because of the frequent fighting on the show, but has been pleasantly surprised. “My friends are constantly sending me funny Kathy memes,” she said.

For “Housewives” obsessives, the addition of Ms. Hilton helps flesh out an offstage drama that is oft-hinted at but rarely seen. A central story line was the ongoing trials and tribulations of Kim and Kyle Richards, as Kim struggled with addiction issues; her and Kyle’s acrimonious battles were a linchpin of early seasons. In recent years, Kyle has obliquely referred to times when she and Ms. Hilton were not on speaking terms, so when it was announced that was joining season 11, Bravo devotees were intrigued.

“She’s like the ghost that’s been wandering around, haunting the housewives,” Ms. Wilson said. “We were missing a key piece.”

“Kyle and I have had our ups and downs,” Ms. Hilton said judiciously. “After that first season, I was so angry and hurt, so I stopped watching the show.” However the sisters began to make amends a few years back. “We started repairing our relationship and it really flattered me that Kyle wanted me to be on the show.”

“My sister and I tease her that if there wasn’t a global pandemic going on and she wasn’t locked down in her house bored for a year she never would have signed on to this in a million years,” Nicky wrote.

Mr. Cohen agreed. “The truth is, also, as funny as she is, she’s got a lot of interesting perspective about living life in the public eye and surviving, and thriving, through scandalous situations. I think there’s a lot of wisdom that she brings to this group that gets lost in the humor.”

A Kind of Revenge

Before now, Ms. Hilton has mostly been seen in relation to her family — as wife of hotel heir and real estate tycoon Richard and mother to the supernova socialites Paris and Nicky who took the early-aughts tabloid world by storm.

But she’s also a stand-alone figure, who experienced the money-fueled 1980s New York social scene first hand, and who oversaw the dawn of the current reality TV era up close (from 2003-2007, Paris starred on “The Simple Life,” which fascinated viewers with its look at the worlds of high society, wealth, and privilege). For better or worse, without Ms. Hilton and her brood leading the way, there would be no Kardashians.

“I was not for Paris doing that show,” Ms. Hilton said sternly. “I was like, ‘This is not a good idea. Why do you want to do this and the modeling? This is not what I had in mind for you,’” she said. “Paris wanted to be a veterinarian and then we moved to New York and the whole thing got crazy.

“It’s usually mother knows best,” she added, “But I have to say I was completely wrong. That show was hysterical. To this day when I see clips of it, I cry laughing.”

“When I got offered ‘The Simple Life,’ my mom told me not to do it and I didn’t listen to her,” Paris, 40, wrote in an email. “Then when it came out and she saw it, she said she was wrong, the show is incredible and she was so proud. The same thing happened here. My sister and I asked her not to do it and now we are both loving it.”

In recent months the media has been re-examining their treatment of a certain genus of young female celebrity during the early aughts, of which Paris is a foremost member. “They were just girls, they were growing up and they were bound to make some mistakes,” her mother said.

Kathy Hilton tells the story of the time she took out the New York Post’s then-gossip columnist Richard Johnson. “I had a meeting with him at four in the afternoon at my club Doubles — at four so that nobody would see us — and I begged him, please leave my daughter alone. Stop writing about her every day, it’s not right and it’s not fair.”

Despite their tumultuous teenage years, both daughters seem to have settled into cozy domesticity. Nicky is now married with two children, and Paris hosts her own Netflix show, “Cooking with Paris,” and is engaged. Ms. Hilton is planning the wedding.

“It’s just so funny,” Mr. Cohen said, “because when you look at the ride that Nicky and Paris have taken Kathy on, all of their kind of high jinks in the public eye through the years, I just keep thinking, ‘Oh, this is delightful.’ This is kind of Kathy Hilton’s revenge.”

But perhaps the most magnetic part of Ms. Hilton is the feeling that she doesn’t need the show, and that her wealth and fame free her from worrying about its outcome. What we’re seeing is a woman who’s utterly at ease with herself, enjoying a new experience.

“Fear is, to me, the worst emotion. I’ve lived in fear before. But as you get a little older, guess what? I don’t care. Just enjoy life. Have a good time,” she said. “And if it gets too dramatic, I’ll make myself a sandwich or go upstairs and play on my iPad.”