PLAY IT AGAIN, CARRIE: Carrie Symonds, who became Prime Minister Boris Johnson’s third wife last month, is renting her wardrobe — once again — for the G7 summit, which runs from Friday to June 13.

Symonds was photographed in Cornwall, where the summit is taking place, wearing a mustard yellow dress by Alice Eady rented from My Wardrobe HQ, the same platform from which she rented her wedding dress last month.

The style is the Rhianon Dress, and rents for 8 pounds a day and is for sale for 265 pounds, according to the site.

Symonds will be having tea with U.S. First Lady Jill Biden on Thursday ahead of the G7 summit, before touring St. Michael’s Mount off the Cornwall coast, according to the British press.

As reported, Symonds’ flowing white dress with bell sleeves for her wedding had been rented from My Wardrobe HQ. The tulle and silk dress, by Greek designer Christos Costarellos, costs 2,870 pounds to buy and 45 pounds a day to rent, according to the site. Symonds wore a crown of flowers instead of a veil.

The fact that Symonds’ dresses are rented, and part of the circular economy, isn’t surprising, considering her professional credentials.

Symonds is head of communications for the animal rights charity The Aspinall Foundation, and her previous job was with the ocean conservation NGO Oceana, where she specifically looked after plastic pollution.

While Symonds is unabashed about her sustainable fashion choices for worldwide photo-ops, Biden has made a point of not discussing her clothes for key occasions. Despite being a proponent of small business, the shop-local movement and American designers, Biden will not be discussing fashion choices, according to her East Wing team.

To that end, FLOTUS’ team sent word to the media this morning that she was looking forward to representing the U.S. “alongside the President” at the G7. The first couple’s first international trip will also include a meeting with Queen Elizabeth II and the president’s much-anticipated sit-down with Vladimir Putin in Geneva.

While President Joe Biden will be about repairing ties with other world leaders, ironing out vaccination rollout plans, promoting climate change and trying to reestablish American leadership on the international stage at the G7, the first lady is trying to relay that she means business, too. To convey that, FLOTUS often favors a dress with a mismatched blazer. That was her uniform of choice a few days ago for an outing with Dr. Anthony Fauci at a vaccination center in Harlem, N.Y.

En route to the U.K. Wednesday, FLOTUS posted a photo of herself seated on Air Force One with a stack of documents and the caption “Prepping for the G7.” Her adversaries swooped in to critique the comment on social media, but the first lady soldiered on delivering brief remarks at the Royal Air Force Mildenhall. When her husband turned to acknowledge U.S. solders, she kidded from the podium, “Joe, pay attention.” 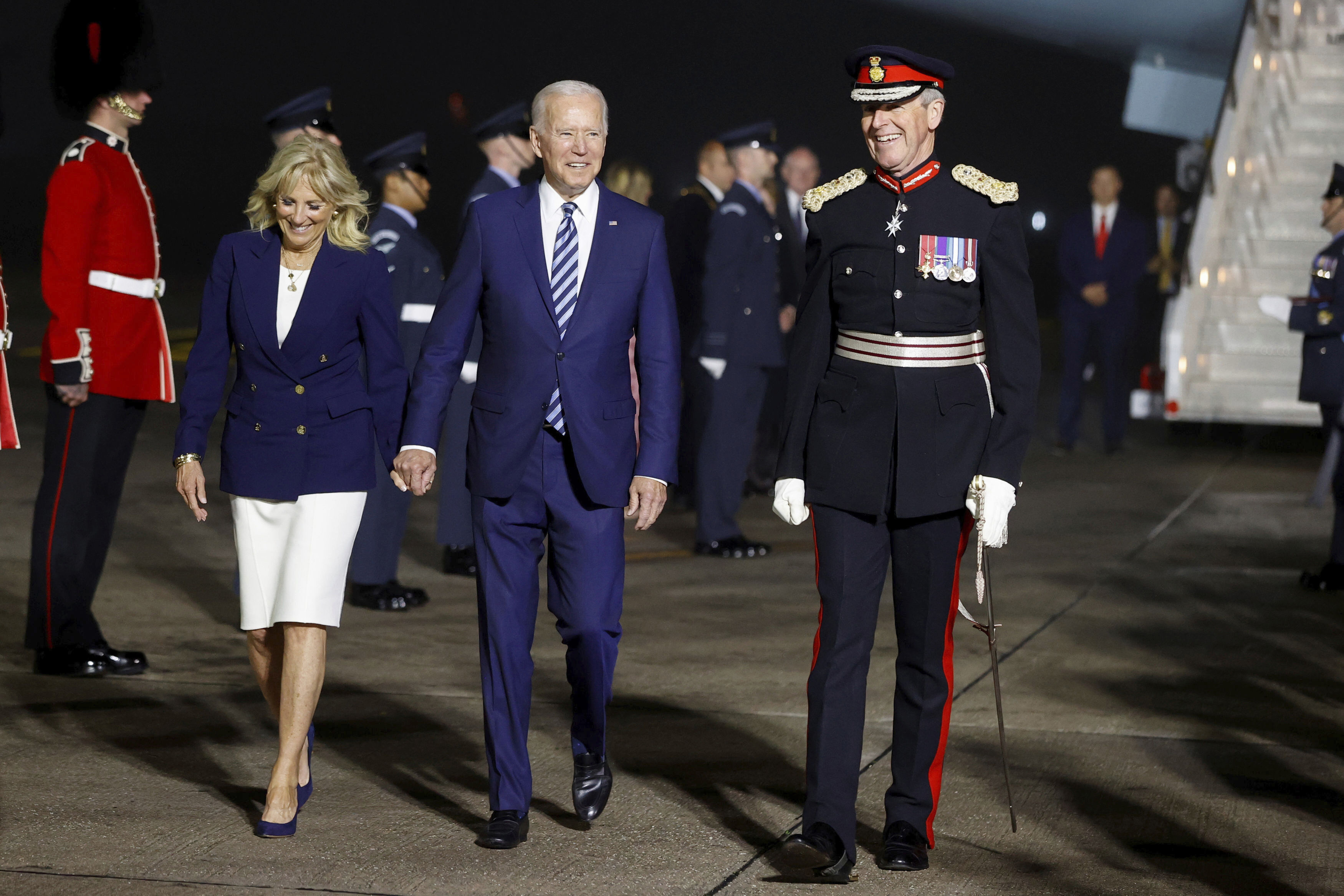 U.S. President Joe Biden and First Lady Jill Biden were escorted after arriving on Air Force One at Cornwall Airport Newquay. Phil Noble/Pool Photo via A

Known to keep things classic in terms of attire, the first lady arrived in the U.K. wearing a white dress, a navy blazer buttoned and navy suede pumps. (Her preferences have ranged from powerhouse designers like Ralph Lauren to lesser-known brands like Markarian.) Despite her team’s reluctance to share her brands of choice publicly, Marion Parke, the American company that made the “MustHave 85” pumps that she arrived in, eagerly shared the news. As for how that choice may have spiked site traffic for Marion Parke, a company spokeswoman did not reply immediately.