RALEIGH, N.C. — Sometimes inspiration flies up and smacks you in the face. That’s what happened to the jewelry maker Susan Reynolds.

“One day I was walking my dog and this cicada flew around and hit me in the head, then it fell to my feet,” Ms. Reynolds said.

Once they emerge, cicadas have only a few weeks to live. This particular one seemed to have died in flight. Ms. Reynolds picked up the insect, took it back to her work table and became fascinated by the shape and intricate veining of its wings.

That’s how she created her first pair of earrings from cicada wings almost 20 years ago, long before Brood X emerged in so many parts of the United States this spring. Now, Ms. Reynolds is filling orders for significantly more customers, who want to commemorate the 17-year cicada, she said.

At first, she kept her cicada earrings simple: just the wing, coated in resin. Then she started adding semiprecious stones and Swarovski crystals. This year, Ms. Reynolds, 62, incorporated flowers, leaves and birds cut from vintage postcards into her designs.The results look almost like tiny, delicate, panels of stained glass.

“I want to make jewelry that looks like a fairy flew into an elderly woman’s room and started snatching things off her dressing table,” Ms. Reynolds said. 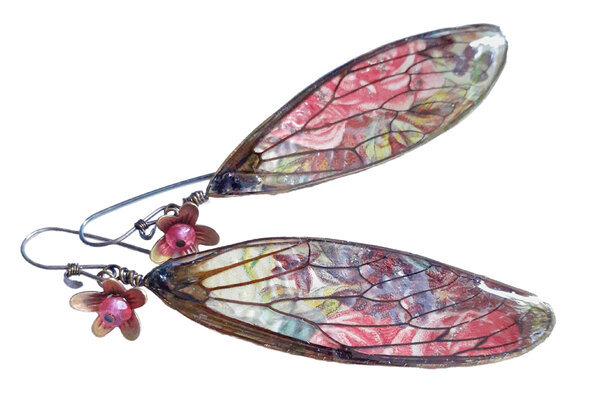 Getting the raw material takes a bit of work. Brood X has been prevalent in the Northeast, Mid-Atlantic and Midwest, but North Carolina doesn’t get large numbers of them.

The Raleigh area does get other cicadas, usually in early July, but until they appear, Ms. Reynolds has relied on packages of dead cicadas from Brood X hot spots. Most of Ms. Reynolds’s neighbors also know that she’s the cicada lady — she put out the word on the neighborhood listserv — so people drop dead cicadas in a box by her front door, too.

Initially, Ms. Reynolds said, she thought: “Who would want to mail me dead bugs? Would the Postal Service even allow that?”

It turns out her customers supply them. Cheryl Fraser, the owner of Galatea Boutique, a local store that sells the jewelry, said that people have started dropping dead cicadas off at the store. (One customer sent earrings to a daughter in Washington, D.C., to commemorate the cicadas’ invasion of the nation’s capital.)

“They’re really taking off,” said Ms. Fraser, who has sold Ms. Reynolds’s jewelry for more than a decade. “It’s a tip of your hat to the cicada.”

Until she’s ready to work on them, Ms. Reynolds puts the dead insects in bags and freezes them. Even frozen, cicadas are very stinky. When she gets ready to remove a batch of wings, she puts on a mask, lights a scented candle, and uses microsurgical scissors to snip the wings from the bodies.

The wings generally don’t need cleaning, but if something is stuck to them, she dips them in warm, soapy water. Despite their ethereal appearance, the wings are pretty tough.

Here comes Brood X. Species of periodical cicadas will emerge in places all over the eastern part of the United States in the coming weeks. Here’s what you should know about our insect visitors making their once-in-every-17-year appearance.

Hot News
Missing woman, 64, found buried in shallow grave in her own back garden
Ghislaine Maxwell wants to halve sentence by serving time in UK
Man hijacked at gunpoint after he refused to buy angry stranger chicken nuggets
Groom ‘furious’ at British Airways after luggage with wedding outfit left behind
Boris Johnson and Erdogan square up to each other at NATO summit as Biden intervenes
Vladimir Putins a lunatic with small man syndrome says UK Defence Secretary
Botellón Spanish Tapas & Wine reopening in Ballpark after lasting just 9 months at City Park
Recent Posts