These days, the Yugo is as much a punchline as it is an automobile. The little Yugoslavian hatchback is legendary for its zero-frills approach to transportation and its poor build quality. It’s often named one of the worst cars ever made, making our top 10 list of automotive abominations. But back in the late 1980s, before the Soviet Union collapsed, Yugo seemed like a potentially serious business. Malcolm Bricklin, the man behind the gullwing-doored SV-1 and founder of Subaru of America, began importing the Fiat-based hatchback to the U.S. from Yugoslavia. For a brief moment it looked like it could be on its way to becoming a cheap import mainstay in this country—and this newly-unearthed 1988 Yugo dealer training video is what greeted those who would try to sell America on that vision.

It won’t surprise you to hear that straight off the top, the enthusiastic voiceover claims that the Yugo “gives new meaning to the term basic transportation.” Things don’t change much after that—the very first “feature” highlighted is the hood release pull located inside the cabin “to give protection against theft and tampering.” Ok then! This should be good. 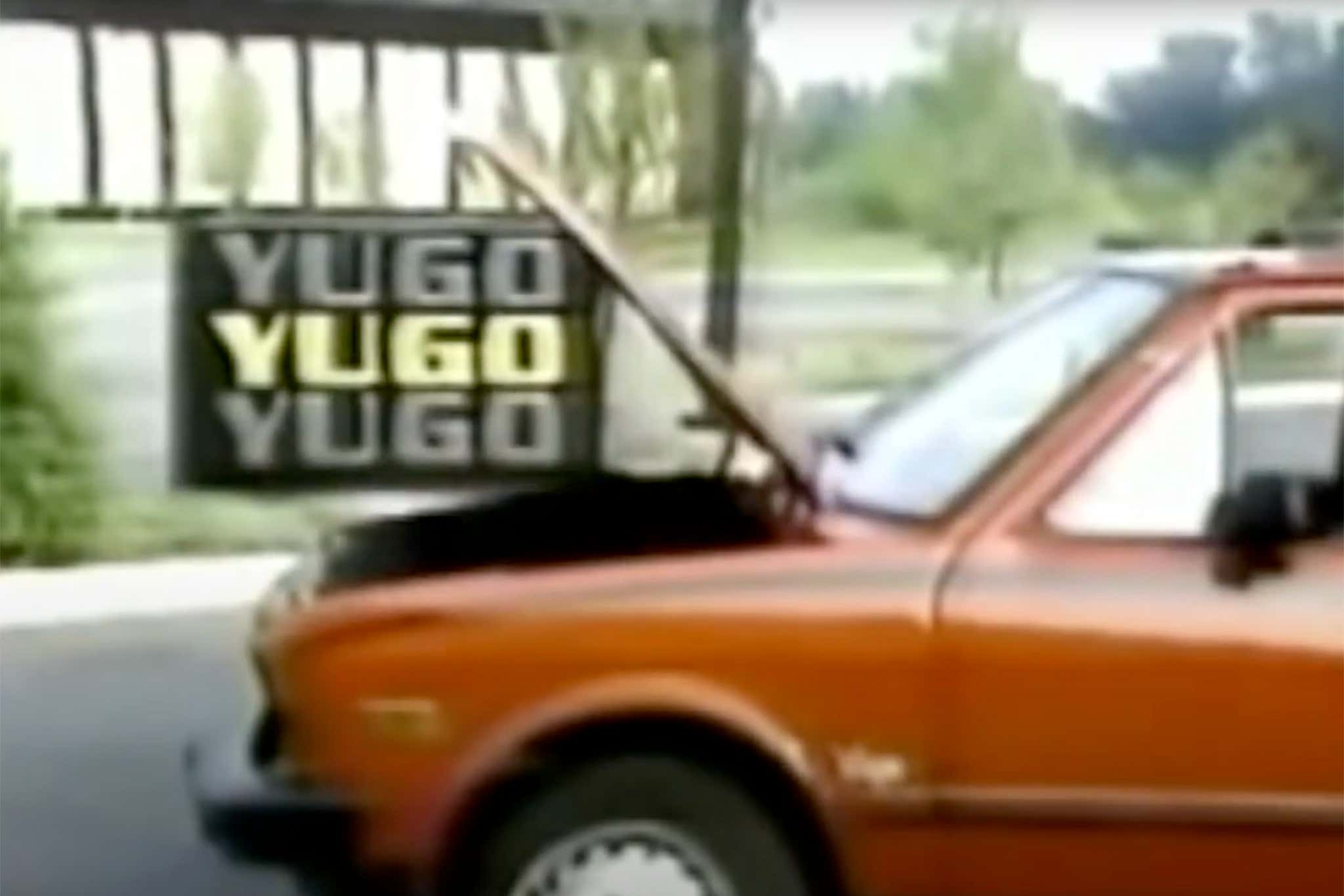 It focuses on two models in the GV series: the no-nonsense GVL and slightly more potent GVX. The narrator makes sure to point out the remote hood release “provides protection from theft and tampering” with the engine. Thank goodness. We wouldn’t want anyone getting to the precious carbureted 1.1-liter four-cylinder engine under the hood. That bad boy had 54 horsepower and could trudge the GVL to 50 mph—yes, Yugo doesn’t even quote a 0-60 mph time—in an absolutely pulse-maintaining 10.6 seconds. The quarter mile meanders by in 19.5 seconds. For slightly less lethargic times, you could just reach under the hood and toss out the spare (or just get a friend to help you carry the GVL).

The GVL transmitted that glorified-lawnmower amount of power through a four-speed manual transmission and the front wheels. Amazingly, its front McPherson struts and rear transverse leaf spring setup could handle all of the mediocre might up front and keep the GVL from cartwheeling into the bushes.

If you thought that the GVL was a hot hatch (you didn’t), watch out for the GVX! That packs a 1.3-liter four-banger with the power of 65 mildly enthused horses. Those reluctantly work together with a five-speed manual gearbox, heavy-duty clutch, and 13-inch wheels to pull the GVX to 65 mph in 14.3 seconds—enough to absolutely smoke the fastest bicycles of the time. Top speed? A sweet 95.6 mph. Take that, Schwinn riders!

Yugo packaged those milquetoast mechanicals inside a body decked out with a front air dam, fog lights, side skirts, rear spoiler, and integrated bumpers. The GVX must’ve looked awfully sharp in the rearview mirrors of dangerously overloaded antique farm trucks that passed it on the road.

Even back in the late 1980s, Yugo seemed to be aware its cars had a certain reputation. The training video’s narrator highlights that the Yugo’s body was submerged in “an electronically charged primer bath to provide maximum rust protection.” The bumpers were made of Lexan, a material that’s “stronger than steel and won’t rust, stain, or tear.” The rocker panels and inner fender wells featured a PVC undercoating.

In the end, none of that mattered. Yugo America went bankrupt in the early 1990s during the Yugoslav Civil War. The Yugo itself, at least as a piece of automotive history, will never die. Neither will the jokes.