BHPian Ray379 recently shared this with other enthusiasts.

In 2020, I started to look for a second vehicle for the household as my mom decided to learn how to drive and my then gf (now wife) and I were planning to get married and she drives. So we would need 2 cars in the household. Then we were planning to get rid of the 4-year-old Maruti Swift with almost 70,000 km on the odo and buy a new car. My mother was sure she wanted a bigger car and really liked the C-SUVs. Thus started my search for 2 cars to be bought, without creating too big a hole in the pocket both in terms of the cost of the cars as well as the regular running costs.

We ended up buying the Nexon Petrol XZ+ in December 2020 (took 4 months for delivery as we bought it via the GoI portal as my mom works in a PSU). This was a manual and both my mom and then gf clamoured that the other car should be automatic. Within a month of driving the Nexon, I realised that this is not anywhere near efficient as the Swift which returned 13-14kmpl in the city and 16-18kmpl on the highway! The Nexon was returning about 8-9kmpl in the city (especially in the hands of our driver) and about 14kmpl on the highway.

Here is the Nexon during our Mumbai to Kanyakumari drive. We figured out a budget of about 6-7Lakhs for the second car. Considering my fuel bill from Nexon, Petrol was a no-go. Diesel Automatics in the new car segment was all going way beyond my budget. So looked at the used car market. I checked out some 15 cars from Cars24, Olx, Facebook Marketplace etc., however, none fit the bill or would help with the lowering of the running costs which we hoped for. This made me look at EVs as an alternative, considering they would also comply with the demand for an automatic car and are usually frugal to run. I checked some less run (<15000 km on the odo) E2Os and E2O+. None were in a good shape and the prices being quoted seemed very high. Then, while going through Facebook Marketplace and OLX, I ended up contacting some folks in Nashik, who had bought some 20 e-Veritos in the auction from Mahindra itself. I bargained to buy an eVerito for 4.8L from the guy. We bought the car in March’21. This car had 120km of range and was just about adequate for city drives.

Here is the Mahindra eVerito. Yes, I added some stickers to make it look less like a white taxi. We used the car for about 11 months and covered 12,000 km on it. At that time I was convinced that an EV was perfect as a second car in the family, especially for city usage.

With the Nexon EV gaining in popularity, Tata Power went on a war footing to set up EV chargers everywhere and even smaller companies like Static etc were setting up chargers. But, they were all CCS2-type chargers and the eVerito, being a 72V system could only accept GBT-type chargers for fast charging. This made the eVerito obsolete. The eVerito did its part to convince me completely to buy an EV the next time I bought a car, especially as a second car in the house.

In August’21 when Tata launched the Tigor, I was smitten by it. My best friend in Kolkata had a Tiago and I had driven it enough to know that for a city car it was more than adequate. The Tigor was the same chassis with the added boot space.

So I ended up test-driving the Nexon EV. And boy was I impressed! It was way better than the eVerito which I was driving and felt like a different class! On checking the prices, I realised that even post the subsidies being offered, I would need to shell out close to 15L. This was an absolute no-go! Not to be disheartened, I booked myself for a test drive at the Puneet showroom in Prabhadevi (where I knew the folks considering they had delivered my Nexon) for the next week when the Tigor would be available.

The test drive car had about 1300km on the odometer. I loved the experience. It had all the ingredients of the Nexon EV but in a smaller package. All 3 of us took turns to test drive the car and even though we were not looking to buy a car, were quite convinced that we should replace the eVerito with the Tigor EV!

In the meantime, Maharashtra Government announced the EV subsidy scheme and the early bird scheme. We calculated that if we bought the Tigor before the end of December’21, we would end up with 2.3L as a subsidy. This along with the fact that we were getting almost 4.5L for the eVerito (this is the time when the cost of petrol hit 100 for the first time and people were looking for EVs), convinced us that we should sell the eVerito and buy the Tigor EV.

We took delivery of the car on 3rd February 2022. It cost us exactly Rs 11 lakh (on-road) post all the subsidies and dealer-level discounts. 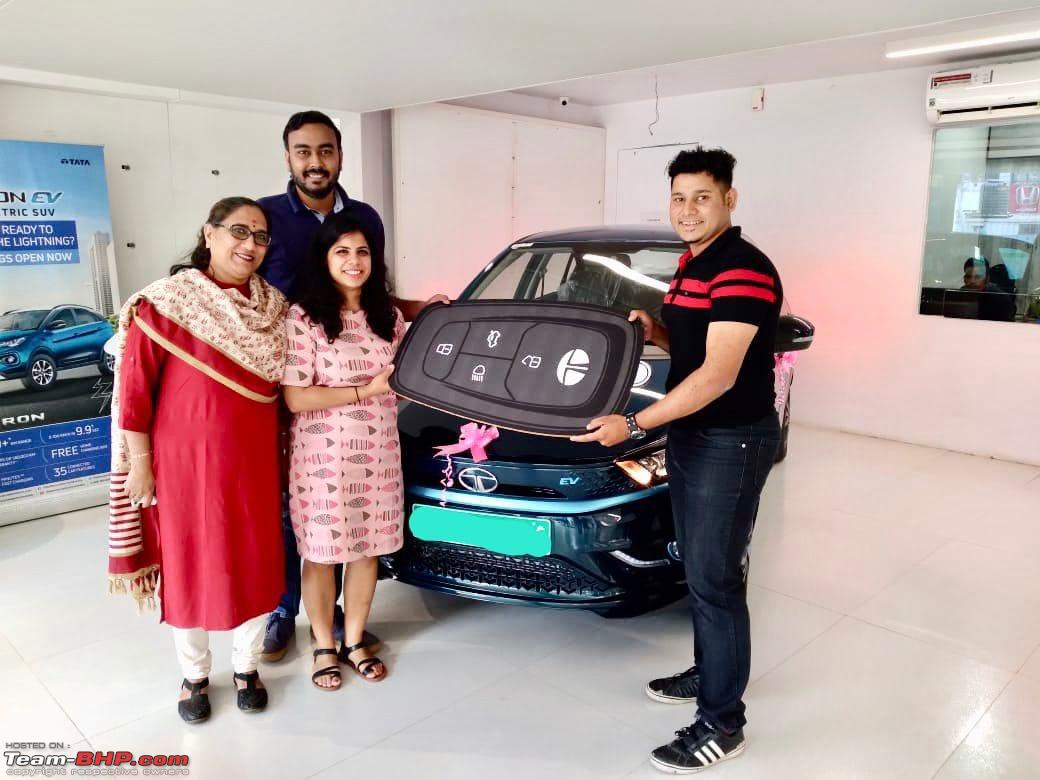 The same week we took delivery of the Tigor, we decided to make a trip to Alibaug. This was the first time I was taking an EV outside Mumbai, so I decided to completely plan the trip. I made a note of all the charging stations along the way (there were none post-Navi Mumbai) and even kept a note of the Tata dealer nearest from Alibaug in case I needed help in terms of getting towed if I got stuck without charge somewhere. The distance to the resort from my place in Mumbai was showing 120km and I knew that if I drove in a sedate manner, I would be able to reach and come back to Navi Mumbai and charge somewhere. Thankfully we were able to charge at the resort itself. Thus began the Tigor EV journey for my family.

So, the Tigor EV will deliver about 180-220km of range no matter how you drive (unless you decide to thrash it around in Sports mode) in the city or on the highway. It takes 7-8hrs to charge via a 15amps socket. Mostly we drive the Tigor in the city and a once-a-month trip to Pune which comes to about 400km (300km to and fro and some running within Pune).

Just to put into context the cost savings one can get from an EV- a round trip to Pune costs us about INR1100 (INR 630 tolls and about INR450-500 for charging the car on a slow charger at both Mumbai and Pune overnight). In the Nexon petrol, it would cost us something like INR 3800-4000 (considering 14kmpl average, 30-litres of petrol and the rest Rs 630 tolls). That’s like 1/3rd the cost if not lesser. When compared to my Nexon, it’s like saving INR10 for every km I drive the Tigor EV vis a vis my Nexon. This has meant that the Nexon is only used when we end up going for our once-in-a-quarter-long drive.

In my 8 months and about 12,000km experience of with the Tigor EV

Here are the positives

Here’s the photo of the odometer when I completed 10,000 km! I have observed the following in terms of issues Overall, I am extremely happy with the car as is my family. It’s a perfect car for the city. The Tigor EV is comfortable, well spec’d and delivers a decent range for daily city usage and planned highway usage. Check out BHPian comments for more insights and information.