Papua New Guinea has a problem: 2018 saw the small Pacific nation host the Asia-Pacific Economic Cooperation, or APEC, summit. The event spurred a controversial spending spree which extended as far as the purchase of a fleet of luxury vehicles to ferry visiting dignitaries around. Now, the government is having a lot of trouble divesting itself of the vehicles which are surplus to requirements, reports The Guardian.

Forty Maserati Quattroporte sedans were purchased in 2018, spending a full 20 million kina, equivalent to roughly $6 million USD in 2018. An additional three Bentley Flying Spurs were also a part of the fleet. The cars were flown into the island nation by chartered Boeing 747s, with the government insisting the vehicles would be quickly sold to private buyers in the wake of the two-day event.

However, this simply hasn’t happened. Reports just months later indicated that the cars were not selling “like hotcakes” as APEC Minister Justin Tkatchenko had initially stated. Only two vehicles had sold, a Maserati and Bentley apiece, with a second Bentley gifted to the Governor-General by the PNG government. Local officials put the problem down to the handling of the tender process. Tkatchenko stated that the offers received were “too low and unreasonable” in the absence of a proper set reserve price for the sales.

Objection to the purchase of the vehicles was heavy from the outset. Citizens and opposition MPs alike argued that trying to sell over 40 luxury cars to the citizens of an impoverished country was also going to be a fool’s errand.

Similarly, the idea of spending millions of dollars on a two-day conference in a country facing major issues with basic infrastructure and healthcare was remarkably unpopular. Paul Barker, executive director for the PNG Institute of National Affairs, summed up the anger and frustration felt towards the government. “The purchase demonstrates a severe lack of foresight and disappointing, apparent readiness to squander public funds, in a developing country, where basic public goods, from access roads to health services, are widely unavailable or severely substandard,” said Baker.

According to the present finance minister, John Pundari, has announced that the vehicles will now be put up for sale at the price of 400,000 kina, or approximately $113,000 USD. It’s not a huge discount over the original purchase price, given these are used vehicles that have now sat in a shed for almost three years. For comparison’s sake, a 2018 Maserati Quattroporte with under 20,000 miles can be had from nearby Australia for less than $100,000 USD. Pundari has referred to the original purchase as a “terrible mistake,” nothing that “if we had any foresight, the Maseratis would not have been purchased in the first place.” 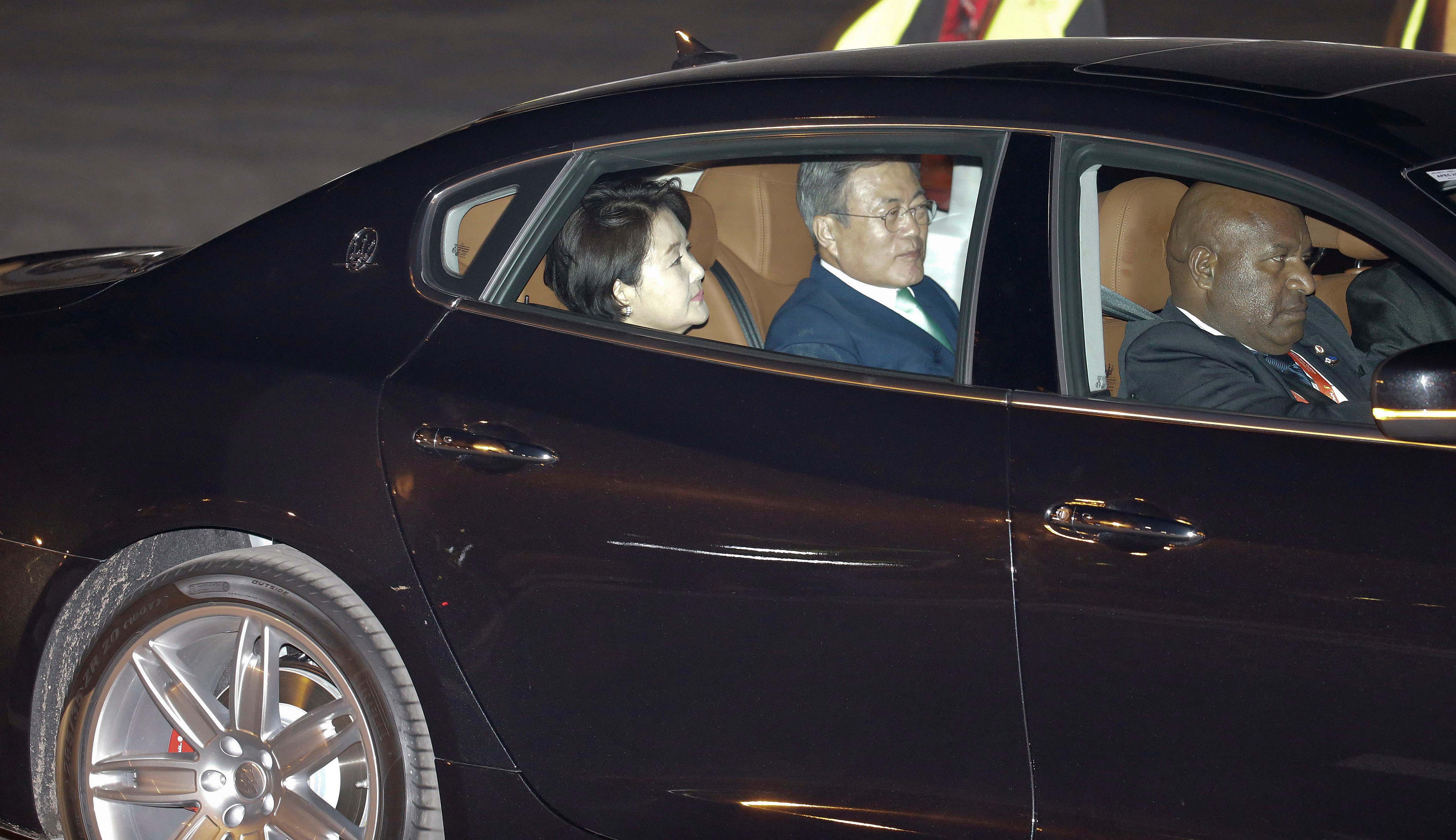 South Korean President Moon Jae-in riding in one of the fabled Maseratis in 2018. You could potentially own this very car!

It wasn’t the only automotive headache of the APEC summit, either: 284 loaner vehicles, from Toyota Land Cruisers to Mitsubishi Pajeros, all went missing in the aftermath of the event. Recently, a seven-day ultimatum was issued to request the return of the vehicles, but none were surrendered before it lapsed on September 16. As of October 4, 2021, approximately 102 of these vehicles were still in the hands of unauthorized people, according to Asia Pacific Report.

Luxury cars can sometimes meet a poor fate in small Pacific nations; we’ve seen them being crushed en masse before. Regardless, if you’ve got a spare 400,000 kina burning a hole in your pocket, get on the phone to the finance minister and register your interest in a tasty black Maserati. It may not handle the roads outside of downtown Port Moresby so well, but if you get it bogged in the mud, do send us a cheery photo of your predicament.