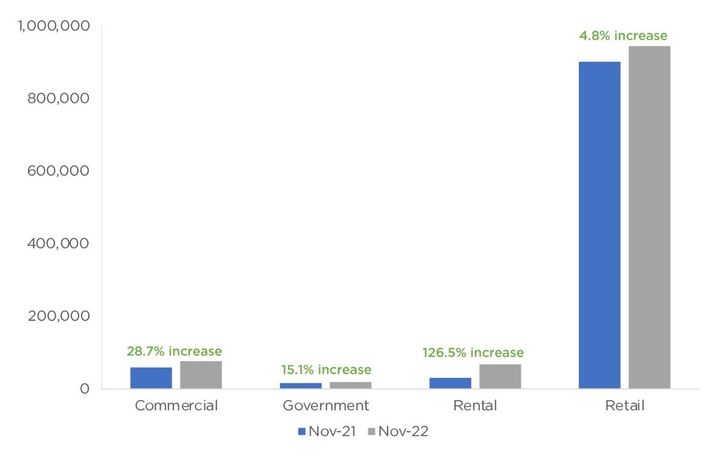 The automotive market is finally seeing some upward momentum in fleet sales, which is positive for the overall market.

Combined sales into large rental, commercial, and government fleets were up nearly 55% year over year in November, the fifth consecutive month of double-digit, year-over-year increases, according to early estimates from Cox Automotive released Dec. 6.

Including an estimate for fleet deliveries into dealer and manufacturer channels, the remaining retail new-vehicle sales were estimated to be up 4.8%, leading to an estimated retail sales pace, or seasonally adjusted annual rate (SAAR), of 12.5 million, down 0.3 million from last month’s pace, or 2.3%, but up 0.9 million, or 7.6%, from last year’s pace. The fleet share of 15.7% was up 1.6% from last month and was up 4.5% from last year. For context, fleet sales volume was 238,288 units in November 2019, representing a 17% share of total retail sales.

“We are finally seeing some upward momentum in fleet sales, which is positive for the overall auto market,” said Charlie Chesbrough, senior economist of Cox Automotive, in a news release. “This shows that new-vehicle inventory capacity is improving to the point where manufacturers are beginning to shift some sales into fleet. Plus, we know fleet vehicles eventually supplement the used-vehicle market, so it is a win-win when fleet sales are moving in this direction.”

Big Change in Manufacturers’ Sales by Fleet Channel Compared to 2019

Interesting changes are seen when comparing the manufacturer’s fleet sales by channel through November 2022 to the same time in 2019. GM has overtaken Ford as the leader in the commercial channel with a 35.3% share. Ford remains on top in government fleet sales with a 62.1% share, while Stellantis’ share dropped from over 22% to only 10%.

Toyota overtook Stellantis in sales into rental fleets by increasing its year-to-date fleet share in November 2022 to 26.2% from 10.9% for the same time in 2019. It’s worth noting that Nissan has revamped its fleet strategy. Compared to 2019 when it was No. 2 in rental fleet share, Nissan dropped 81.7% to 11% and is now below Toyota, Stellantis, GM and Ford.