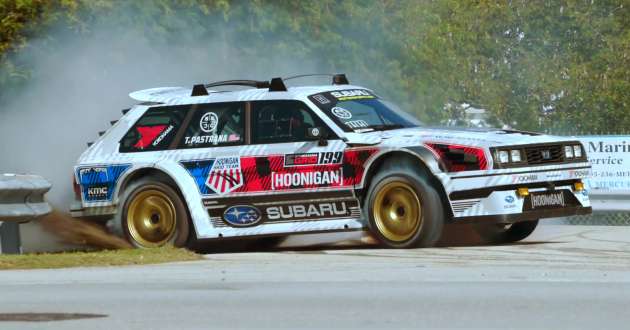 Travis Pastrana is back for the 12th edition of the Gymkhana series, which means plenty of tyre-shredding and stunts that must be seen to believe. This time, a heavily modified 1983 Subaru GL wagon called the Family Huckster is Pastrana’s weapon of choice, replacing the previous Airslayer Global Takeover that was based on a WRX STI.

Taking place in Florida, Gymkhana 12 starts with Pastrana “warming up” with a plenty of drifting and sliding before proceeding to grind down some barrier rails. The next stunt involves doing some donuts around the Grave Digger monster truck, while others that follow are a race against a drag car and jet plane, performing jumps at over 257 km/h (160 mph), jumping over a helicopter, and many more. It’s just over 10 minutes of non-stop action and impressive vehicle control.

“Making this Gymkhana video was even more fun that the last one, except for the part where I broke my pelvis base jumping! That delayed the shoot while I healed up but it was worth it.” said Pastrana.

“This Subaru wagon is the most fun car I have ever driven, and I’m addicted. This was great chance to be even more creative with the stunts and it was great to have some of my favorite people make some cameos. I hope everyone watching enjoys it as I did. And what a car, I really tried to break it, but it just kept going. This whole thing was so epic!” he added.

The Family Huckster is powered by the same engine that was used in the Airslayer, which is bespoke 2.3 litre turbocharged and intercooled flat-four engine serving up 862 hp and 900 Nm of torque. Developed by Vermont SportsCar (VSC), the EJ-based mill features a Garrett turbocharged, a dry sump oil system, sodium-cooled valves and diamond-like carbon coated camshafts.

VSC is also responsible for the billet block and heads, twin belt timing system, inlet manifold, anti-lag system and turbo management. All that power is sent to all four wheels via a SADEV six-speed sequential gearbox that incorporates a Tilton triple-plate carbon racing clutch, with a VSC front differential and SADEV rear differential.

Also installed on the Family Huckster is an active aero rear wing, which is controlled electro-pneumatically, along with front and rear hydraulic aero flaps located on the fender flares which can be controlled automatically or manually. As a tribute to the US Ski Team Subaru GL wagons of the 1980s, there’s also a functional carbon-fiber roof rack that directs air to the rear-mounted radiator.