As we enter December, the snowy grounds of winter are back on the menu in Forza Horizon 4. Along with the icy conditions, there’s more new events and prizes to go hunting for.

There’s no new content this week, but there is another opportunity to grab some returning Playlist prizes for 50% and 80% completion. Let’s dig through the snow to find winter’s gold. 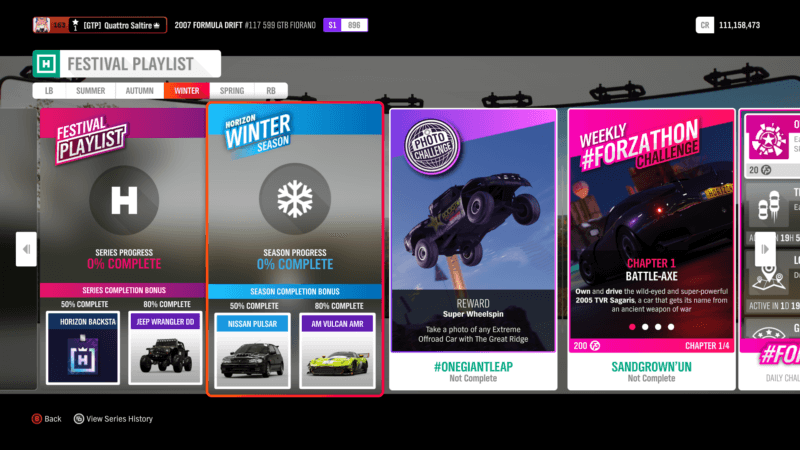 Rallying Through The Snow

Leading the way for Playlist prizes this week is the 1990 Nissan Pulsar GTI-R. Among the Group A homologation specials, the Nissan often tends to be a little overlooked.

The Pulsar features an ATTESA four-wheel drive system, as well as a 2.0-liter turbocharged engine. With 227hp, the Pulsar still has performance to keep up with more modern machinery. Despite rivals going on to achieve iconic status, the Pulsar has garnered its own sleeper fans.

Those after more power can look to the Aston Martin Vulcan AMR Pro. If the standard Vulcan is not extreme enough for you, the AMR Pro upgrade package aims to put things right. The new aero changes bring more downforce and shorter gear ratios help improve acceleration. Under the hood is a monstrous 7-liter V12, making 820hp. Even with the extra downforce, the snowy conditions will make the Vulcan a handful.

The first December Photo Challenge is all about getting big air. Grab an Extreme Offroad car and head to The Great Ridge for #OneGiantLeap. Seasonal championships this week wield prizes including the Peugeot 205 Rallye and Toyota T100 Baja Truck.

This season’s main championship prize comes in the form of the 1999 Ford Racing Puma. One of Ford’s more underrated smash hits, the Puma is regarded as one of the most fun cars of the late 1990s. Under the hood sits an ordinary sounding 1.7-liter engine with just 153hp, but with a keen chassis, the Puma demands to be thrashed on twisting roads.

To grab the Puma, you’ll need to win the “Teen Spirit” championship.

Latest events for Winter are below:

I’ll Make A Van Out Of You

The Trial: Track In (Co-Op Championship) 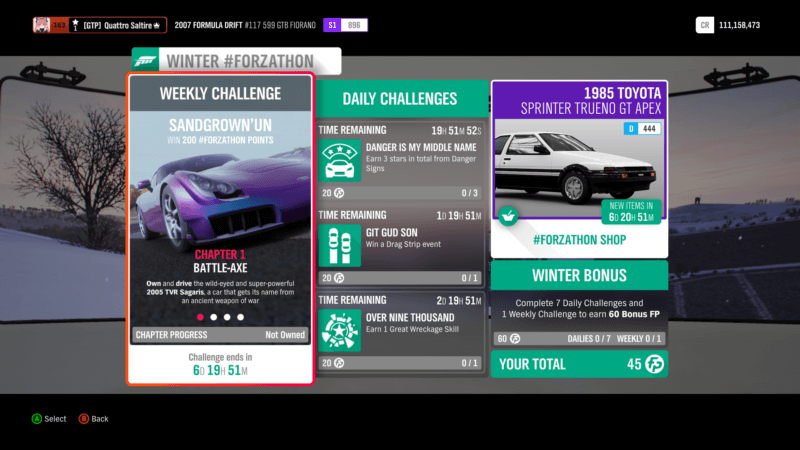 This week, the Forzathon spotlight focuses on one of the maddest British sports cars: the 2005 TVR Sagaris. Jump into this fiberglass machine and get started.

Next up, put your foot down and attempt to reach the Sagaris’s top speed of a dizzying 185mph. Afterwards, take some brave pills and fight the Sagaris through traffic to earn 15 Threading The Needle skills.

Finally, head for the races and take the Sagaris to victory in a Road Racing Series event at the grueling Goliath to finish up this week. 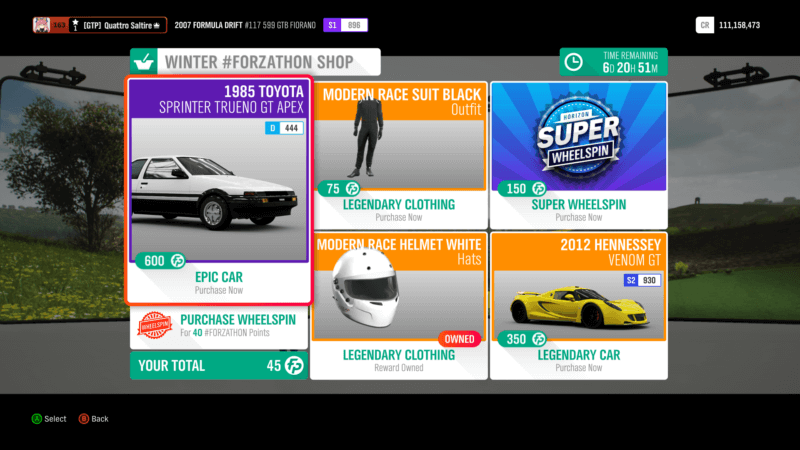 Toyota heads up the shop lineup this week with the 1985 Sprinter Trueno. Also known as the AE86, this boxy hatch has become one of the most iconic machines in car culture.

The AE86 has built its reputation as one of the more accessible ways to get into drifting. It also became a hotbed for tuners to work their magic. The standard AE86 features a 1.6-liter engine making a paltry 128hp, but with massive tuning capabilities, you’ll soon be able to extract much more.

At 600 Forzathon Points, the AE86 is expensive, but you’ll be getting one of the most highly regarded JDM classics as a result.

On the other end of the scale lies the Hennessey Venom GT. Built to face off with the Bugatti Veyron, the Venom is one of the fastest cars ever to come out of America. Under the stretched Lotus body is a 6.2-liter twin turbocharged V8 making 1200hp. With all that power going to the rear wheels, keeping the Venom in check will require lots of skill.

At 350 FP, the Venom won’t make as big of a dent in your wallet. If you want to embarrass those in Bugattis and Koenigseggs, then this American weapon is the answer.