Rolls-Royce is working on its first electric model, the Spectre coupe, which is scheduled to be launched in the latter part of 2023. It may look a lot like the Wraith, but its body is different and sleeker, although the most significant changes are in the front of the vehicle.

It features what looks like quite a small grille by Rolls-Royce standards, slim possibly split headlights and the lower part of the bumper looks like it is either completely closed off or it only lets in very little air through. The doors are still rear-hinged, in the traditional style, and even once the camouflage comes off, the Spectre won’t stand out as being too different among the rest of the lineup.

The camouflage that covers the entirety of this Spectre prototype’s body has several messages on it, including one that announces this vehicle will be ‘perfectly noiseless.’ In this video posted by CarSpyMedia, the prototype rolls past the camera and it really is silent, although Rolls-Royce won’t be able to eliminate road noise and the vehicle will have to have a pedestrian warning sound that it needs to play up to 20 km/h (12 mph) in Europe. 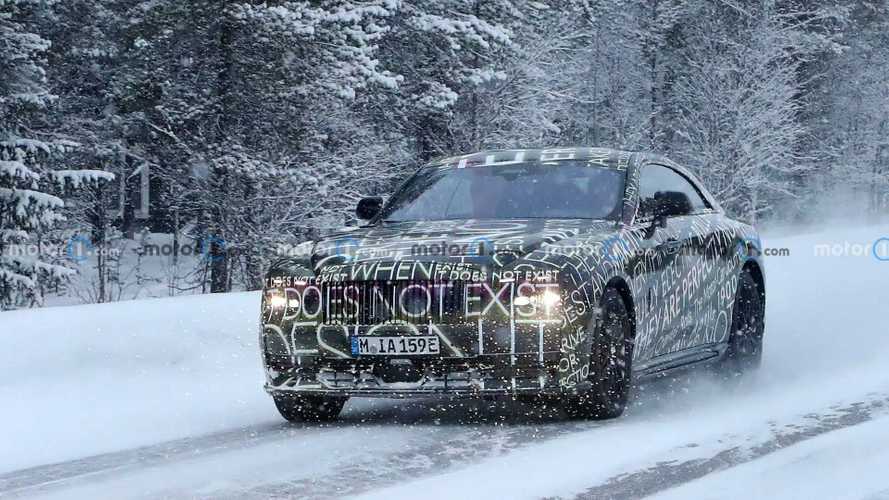 It will be inside where Rolls-Royce engineers will surely find sound insulation more difficult. EVs have shown that when you eliminate the thrum of an engine (as muted as it may be in some luxury cars), this will make all other noises more noticeable. Mercedes-Benz seems to have done it pretty will with the EQS, though, so we’re sure this electric Rolls will be at least as good.

The Rolls-Royce Spectre is believed to have a very big battery pack, possibly up to 120 kWh, and that is said to be good for a range of 435 miles (700 km). However, we’re curious to see what impact adding such a big battery pack into an already heavy vehicle (a V12-powered Wraith weighs 5,379 pounds / 2,440 kg); it could be a near-3-ton car.

Power therefore will need to be ample. Rumors say its powertrain could be comprised of three motors and that it will be related to the setup that motivates the BMW i7; a combined output of up to 740 horsepower seems reasonable given how heavy the Spectre will end up being.